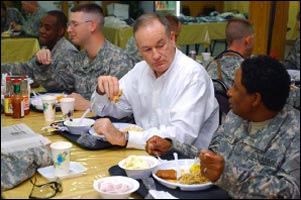 From the official web site of the Multi-National Force – Iraq, comes this nausea inducing press release:

“In a war that has perhaps been even hotter in debates than it is on the streets of Baghdad, the one constant in the media has been ‘spin.’

“It was fitting, then, that Bill O’Reilly, host of the Fox News talk show “The O’Reilly Factor” – dubbed the ‘No Spin Zone’ – came to visit the Camp Striker, Iraq dining facility Dec. 15.”

As if our long-suffering troops don’t have enough hardships to endure, now they have to eat with Bill O’Reilly. I wouldn’t be surprised if there was a mad rush to volunteer for patrol duty that evening. The streets of Baghdad may indeed be a lower risk assignment. At least they would offer some relief from The Fester who is unlikely to ever venture out onto them. 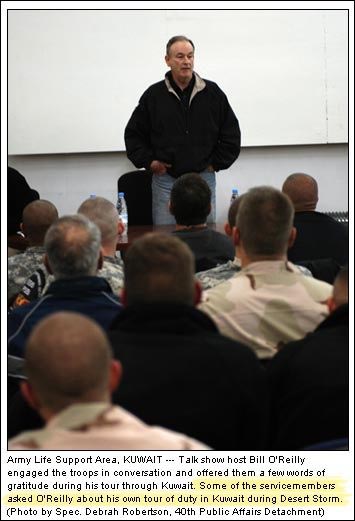 O’Reilly also visited Kuwait where he spoke to soldiers and signed autographs. The caption to this photo (click to enlarge) describes a special treat he bestowed upon his audience:

“Some of the servicemembers asked O’Reilly about his own tour of duty in Kuwait during Desert Storm.”

Retelling these stories might have been a source of pride for Bill, comparable to when he received his Peabody Awards for journalism. It would have been, were it true. But Bill never served in the military and thus, there was no tour of duty during Desert Storm. Just as there were no Peabodys. I have a certain empathy for O’Reilly because I know how hard it is to build a mythology around oneself when all you have is a good imagination and a resume of lies. (I still can’t convince people that I painted Van Gogh’s “Irises”, taught Hemingway to fight, and fathered Angelina Jolie’s baby).

While O’Reilly was regaling the troops with flights of fiction and signing copies of the book he’s currently promoting, Al Franken was entertaining them along with the rest of the USO performers. This is Franken’s seventh USO tour. As Franken is fond of saying:

It seems O’Reilly and Franken missed each other in Kuwait by a day, which may be for the best because there is already too much sectarian disharmony in the region. Perhaps the best way to keep those two from encountering each other would be to end this disgraceful war so that neither will ever have to make these trips again.