Another week, another new low for Sarah Palin’s Alaska on The Learning Channel. 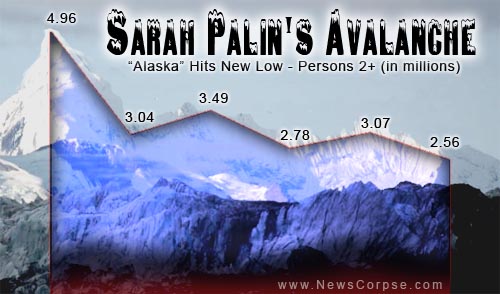 Last Sunday’s airing of “Alaska” pulled in just 2.56 million viewers. Over its run Palin’s show has steadily declined to the point where it is now struggling to reach half of what it did on its debut.

Nevertheless, much of the right-wing press is heralding the show as a success. Fox News, Politico, and others are speculating that TLC is trying to sign Palin up for another season. Perhaps so. The show is a top performer for the little-watched network. However, to put it into perspective, the History Channel’s “American Pickers” has twice as many viewers as Palin’s Alaska.

Politico’s article on Palin’s ratings was notable for its cluelessness. They cited as their source PopEater,com and and reprinted what can only be described as PR from TLC. Without bothering to check, Politico published a quote that asserted that Alaska’s numbers were “better than the numbers for Bravo’s ‘Housewives’ series or most other cable shows.” However, the Real Housewives of Atlanta did 3.22 million compared to Palin’s 2.56 million. And Palin fell more than a million viewers short of making the top 25 for cable programs last week.

The PopEater/Politico article also quoted a “friend of Palin” who said that Palin considers herself in the Jennifer Aniston league because she “knows that celebrities get millions of dollar for each episode of their shows and thinks she’s worth it too.” Right. Palin’s 2.5 million geriatric viewers on TLC are worth just as much as 20-50 million young adult viewers of Friends on NBC.

So who is more delusional, Politico or Palin?