If you visit the Fox News web site today (Christmas) you will find a featured editorial by regular Fox contributor Cal Thomas titled: To the NBA, Christmas Is Just Another Day to Make Money. Thomas leads off his article by saying…

“This Christmas the NBA has seen fit to schedule five, count them, five games on Christmas Day.”

Thomas’ outrage needs to be tempered with a little reality. The NBA has been scheduling games on Christmas day for more than fifty years. And if broadcasting on Christmas is some sort of affront to Jesus, is Thomas just as offended by his own network, Fox News, which has not gone dark for the holiday? Nor has Fox Entertainment, FX, Fox Sports, or the Fox Nation online that also faulted the NBA’s scheduling: 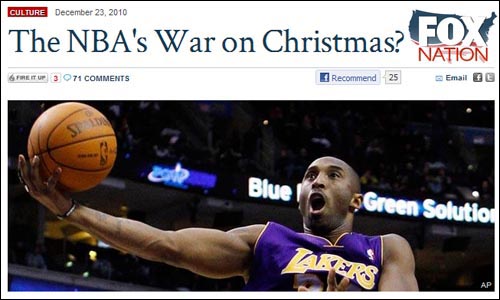 As if that weren’t bad enough, Thomas went on to advocate for the reinstatement of “blue laws,” a repressive legal relic that prohibited most forms of commerce on Sundays and religious holidays. Thomas would have us return to the days of prohibition, scarlet letters, and witch burnings.

Thomas ought to put a little more thought behind his screeds. If he is going to object to the NBA conducting its business on Christmas, he is either going to have to include himself and Fox News or shut his hypocritical, judgmental mouth.

6 thoughts on “To Fox News, Christmas Is Just Another Day to Make Money”