TGIF: Donald Trump has had a disastrous week (again). He spent much of it taking the side of white supremacists and neo-Nazis in Charlottesville, Virginia. He’s suffered an exodus of supporters and resignations from his advisory councils. Even conservative Republican allies in Congress are questioning his stability and competence. And to top it off he has just jettisoned his Chief Strategist and ideological mentor, Steve Bannon. 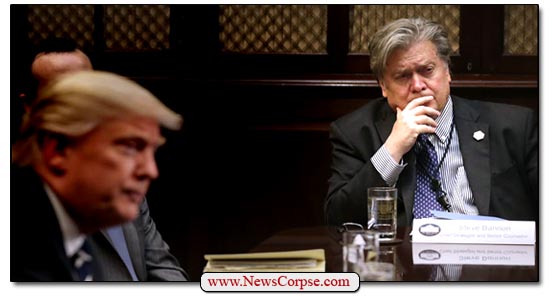 Make no mistake, this is not a transitional moment for Trump. He isn’t pivoting to become more presidential. He doesn’t have the foggiest notion of what that even means. The banishing of Bannon had nothing to do with his overtly racist views or his bragging about being the voice of the alt-right. Bannon was kicked out of the White House because a recent interview with the American Prospect pissed the President off. In it Bannon diminished Trump and took credit for what he regards as accomplishments. Trump’s ego could not abide that.

So what happens now? First of all, nothing changes at the White House. Trump will retain the mantle of the radical extremist he has adopted since entering politics. His administration is lousy with like minds. Sebastian Gorka, Stephen Miller, Kellyanne Conway, Jeff Sessions, etc., will continue to advance their right-wing bigotry. This is the house that Trump built and it’s still running on his repugnant fumes. As they say, the fishy stink (of racism) emanates from the head.

But Bannon’s future is much more interesting. Sources say that he will be heading back to his previous post as chairman of Breitbart News. He has been seen meeting recently with the billionaire Mercer family who bankroll the website. It’s fair to assume that he’s seeking additional funding. And upon his return he may have something to say about his tenure at the White House and his humiliating ouster. Gabriel Sherman of New York Magazine has been watching these events closely. He tweeted this following the news of Bannon’s exit:

That prediction has already been confirmed by Joel Pollak, senior editor-at-large for Breitbart News. Pollak posted a one-word tweet that said simply “#WAR” With Bannon back in charge, Breitbart is likely to begin an offensive blitz on Trump, his family, and his inner circle. He has no history of placing loyalty over ideology. And the ideology to which he adheres is one of alt-right jihadism.

Look for the GOP extremists to fall in line behind Bannon. They will accuse Trump of caving in to the globalists and becoming just another mainstream RINO. As if he were ever a real Republican in the first place. And this opposition will trigger Trump’s knee-jerk defensiveness and whiny victimhood. What did they expect? He lied his way to the White House and the alt-rightists tolerated it because they they thought they could control him. The same is true for the evangelicals that betrayed their faith in order to back Trump.

Now they are all learning the hard way what Democrats and liberals warned them about. Trump is a malignant narcissist who can’t be trusted. He is only in this for himself. Anything that gratifies his ego or fattens his wallet will gain his support. Criticism or inquiries into his corrupt finances will draw his ire. Which makes this a good time to remember that the special counsel, Robert Mueller, is still hard at work. The end of this road for Trump is humiliation and defeat. He will either resign in disgrace or be impeached and prosecuted. And perhaps, if justice prevails, both.