After nearly a year, no one is particularly surprised when Donald Trump demonstrates just how stupid he is, but it is sometimes jarring to see how proud he is of it. And on Thursday night Trump provided a perfect example of both his painfully weak grasp of common knowledge, along with a massive dose of callous insensitivity toward the needless suffering of others. 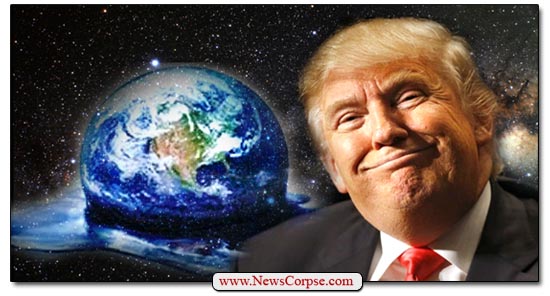 This example came in the form of a thoughtless tweet that served no purpose other than to belittle sincere advocates for the health of the planet and its inhabitants. Trump tweeted:

In the East, it could be the COLDEST New Year’s Eve on record. Perhaps we could use a little bit of that good old Global Warming that our Country, but not other countries, was going to pay TRILLIONS OF DOLLARS to protect against. Bundle up!

By wishing for “a little bit of that good old Global Warming,” Trump is in effect wishing that millions of people suffer and die. He clearly doesn’t have even the slightest understanding of Climate Change, and thinks it’s cute to pray for more of it.

Let’s be clear, the record cold temperatures that are blanketing much of the Northeast and Midwest are, in fact, the result of Climate Change. Higher temperatures in arctic regions and oceans push frigid weather patterns farther south than they ordinarily go. And that’s why people from Maine to Minnesota will be shivering and many will be in mortal peril.

Trump and his science-denying ilk still don’t understand that aberrant weather patterns are a product of Climate Change (which is why scientists don’t call it global warming). He doesn’t know the difference between climate and weather. He can’t connect the incidence of extreme temperatures and natural disasters like hurricanes to the climate disruptions caused by human industry and behavior. And even when there are episodes of cold temperatures in one particular locality, in other places it is uncommonly warm. Southern California is in the eighties. Australia is experiencing record highs. So chills in New York don’t negate the fact that the planet’s climate is rising. 2016 was the hottest year ever. 2017 is set to be one of the three hottest years on record.

Trump’s flagrant ignorance is compounded by his brazen lying. Who knows what he’s talking about with regard to the United States spending “trillions of dollars” to protect against climate change. Efforts to mitigate climate disasters were being put into place internationally until Trump petulantly withdrew from the Paris Accords. But the cost never approached trillions. Fortunately, many states, cities and private companies repudiated the President and still intend to implement the initiatives outlined in Paris.

Finally, Trump tagged on a stony and insincere tip to “bundle up.” Really? That’s all he could muster for one of the coldest periods on record. Doesn’t he realize that people die under these circumstances? It was apparently too much trouble to post information on finding shelters for the homeless. Or to help those affected to stay warm in poorly insulated apartments and homes. Or to offer advice on how to prevent pipes from freezing or where to get help if someone is suffering from hypothermia. Just bundle up and mock science by wishing for the problem to get worse.