America’s most brazenly authoritarian president continues to affirm that he craves nothing more than unbridled adoration and endless tributes to himself. That is the only explanation for his latest initiative to embarrass the nation. Trump’s proposal for a military parade has already attracted opposition from both Republicans and Democrats. And for good reason. 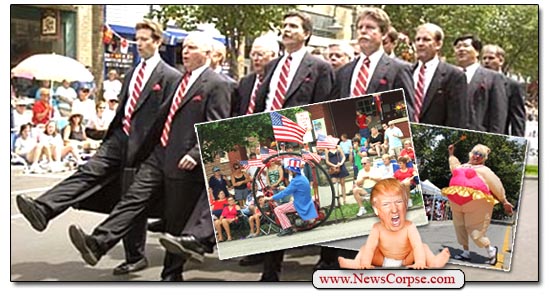 The parade that Trump is proposing is exactly the sort of thing that his heroes in Russia and North Korea stage for their own splendiferous glory. And if they can have a parade, Trump is damn sure that he should have one too. An even bigger and better charade …er, parade… to honor his presidential bone spurs. Never mind the cost to the military; or the disruption from training and readiness; or the necessary projects that would suffer from lack of funding; or the expense of repaving streets in Washington that get torn up by tanks.

Well, it didn’t take long for the “resistance” to organize a response to this idiotic idea. The Wrap is reporting that:

Dozens of protesters are planning to disrupt President Donald Trump’s planned military parade in Washington, D.C., vowing to lie in front of tanks to keep them from moving.

“We now have nearly 50 Americans who have signed on to lay in front of the tanks of Trump brings out a military parade,” activist Arn Menconi wrote on Wednesday in a gesture he said was inspired by the Chinese pro-democracy protesters who made history during the 1989 demonstrations in Beijing’s Tiananmen Square.

This would be a profoundly moving and meaningful demonstration that would fittingly shame Trump (if that’s even possible) and tie him to the traditions of the dictators who inspire him. At the very least it would piss him off terribly.

In addition to this righteous protest, I would suggest another parade the day before Trump’s. It should be a Doo-Dah style affair with satirical marchers that would mock Trump’s ego-fluffing circus stunt. I see elephants and jugglers and the Hair Club for Men Marching Comb-over Brass Band. Now THAT would be fun.