The Radio and Television News Directors Foundation has announced that its 2007 First Amendment Leadership Award has gone to that paragon of fairness and balance, Roger Ailes, chairman and CEO of FOX News. In other news, vampires are devouring the brains of babies across America.

The award is given to “a business or government leader who has made a significant contribution to the protection of the First Amendment and freedom of the press.” So far as I’m able to discern, Ailes earned this recognition because he “made [Fox] the ratings leader among cable news channels.” At least that’s all the press release mentions. In his acceptance speech, Ailes extolled the virtues of the diversity of ideas, a virtue that Fox News honors by always presenting a wide range of opinions – from the right, all the way to the far right: 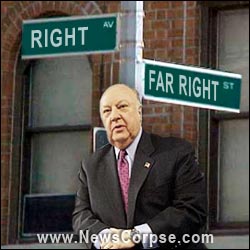 “The greatest danger to journalism is a newsroom or a profession where everyone thinks alike. Because then one wrong turn can cause an entire news division to implode. We must respect and encourage diversity of thought and speech in the newsroom.”

Ailes went on to demonstrate his commitment to diversity with humor that cut across the ideological landscape. There was a joke dismissing global warming; another demeaning the French; a swat at the Clintons’ marriage; and the always hilarious conflation of Osama and Obama.

But it wasn’t all fun and games. Ailes departed from the levity to address a serious and timely matter – the controversy surrounding Fox News and the Democratic candidates’ debate in Nevada:

“Recently pressure groups are forcing candidates to conclude that the best strategy for journalists is divide and conquer, to only appear on those networks and venues that give them favorable coverage…If you are afraid of journalists, how will you face the real dangers in the world?”

Since Roger has resolved to be serious, so will I. Nobody is proposing that candidates only appear in venues that give them favorable coverage. They just don’t want to be exploited by venues that are openly antagonistic. And none of Fox’ critics are afraid of journalists. They just refuse to bestow legitimacy on the partisan agents of their opponents.

Congratulations Mr. Ailes, on managing to weasel an award from your buddies in the mainstream media that Bill O’Reilly, Sean Hannity, Brit Hume, et al, so often disparage. But don’t expect valentines from the targets of your political bile. And don’t be surprised when guests don’t show up at your televised lynchings.

A little background on the RTNDA: This is an organization whose President, Barbara Cochran, claimed that regulating “video news releases” amounts to government intrusion into the affairs of news broadcasters.

YouTube Video of Ailes at the RTNDF awards gala.