There is no one on Fox News who is more devoted to censorship and averse to free speech than primetime host Laura Ingraham. She wrote a book titled “Shut Up and Sing,” an extended diatribe on denying the First Amendment to talented Americans who were smart enough to become successful and popular. 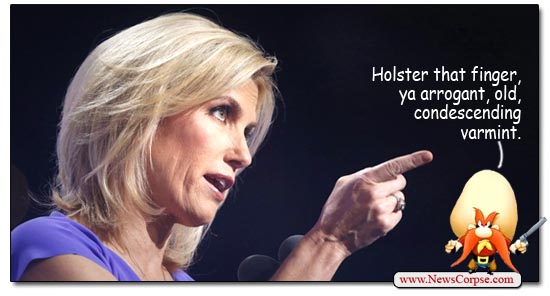 Ingraham recently expanded on that theme to deliver an overtly racist tantrum aimed at NBA stars LeBron James and Kevin Durant. Annoyed that they had the audacity to criticize Dear Leader Donald Trump, Ingraham literally told them to “shut up and dribble.” It was just the next step in her crusade to silence anyone with whom she disagreed. Particularly if those dissenters were dark-skinned celebrities. You will never hear her attack crackpots like Ted Nugent or Scott Baio in the same way.

On Friday morning Ingraham lashed again. This time her vitriol was aimed at Sarah Chadwick, a survivor of the massacre at Marjory Stoneman Douglas High School. And it was typical of her censorial tendencies as she tried to shame Chadwick for speaking out. Ingraham tweeted this:

HOW TEENS SPEAK TO AND ABT ADULTS: “We shd change the names of AR-15s to ‘Marco Rubio’ bc they are so easy to buy,” Stoneman Douglas sophomore Sarah Chadwick tweeted.

Seriously? Ingraham is outraged that a young adult with her own opinions would challenge an almighty member of the United States Senate. [Here is Chadwick’s tweet] Not to mention a young adult who just went through a nightmare and lost close friends and classmates. If anyone has the right to express her thoughts about assault weapons and the failure of the political class it’s Chadwick. And she took the opportunity to do so in a delightfully snarky response to Ingraham:

Just brilliant. Chadwick demonstrated that she has far more dignity than Ingraham by not emulating the Fox Host’s crass smear tactics. It was a succinct reply that conveyed the message that Ingraham’s ignorance isn’t really worth wasting time on. And at the same time she trumped the professional “journalist” by correcting her poor reporting.

This conniption fit by the allegedly “mature” Fox News shill adds to the pile of insults and slanders that Fox and other right-wing media hacks have been shoveling. There have been ludicrous accusations that the students were paid actors or professional protesters. They have been criticized for being insolent punks who were raised badly. And worst of all, raving conservatives have insisted that they should be disregarded because they are too emotional or too young to have valid opinions.

That’s the perspective of old fogies who wallow in their ageist supremacy and spend their days pulling out what’s left of their hair. There is no one more suitable to comment on the state of our society than those who are about to inherit it – complete with the flaws built in by their predecessors. This is their world. Adults who think that they are leaving it to their children have it backwards. They are just the caretakers for the future owners. And with heirs like Chadwick and her colleagues at Stoneman Douglas, the future has never looked brighter.

2 thoughts on “LOL: Fox News Host Thinks Students Should Shut Up, Gets (Fact) Checked By Student”