Despite the sharply reduced attention span, and constricted news cycles, of the 21st century in America, the nation is still immersed in the aftermath of the tragic massacre in Parkland, Florida. It is totally out of character for the public and the media to remain so focused on a single issue. Much of the credit goes to the passion and eloquence of the students who survived the shooting rampage. 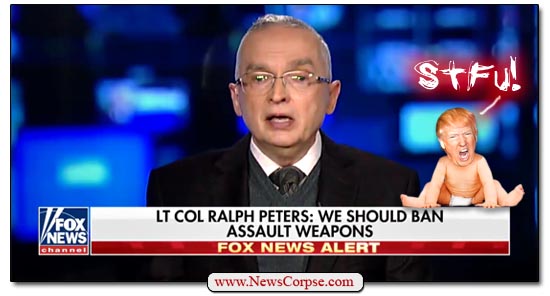 However, this story’s staying power isn’t the only unexpected fallout from Parkland. While most Republican stalwarts continue to be whores to the National Rifle Association (NRA), along with their accomplices in the media, there have been a few surprising defectors. And one of them was interviewed by Fox News anchor Neil Cavuto on his Fox Business program on Friday.

Ralph Peters is a retired Army Lt. Colonel who has been serving as a military analyst on Fox News for several years. He generally falls in line with the hard-right narrative espoused on the network. In fact, he often wanders off the farthest right ledge of conservative wingnutism. For instance, he was once briefly suspended by Fox News for calling President Obama a “pussy” on the air. And then there was the time he argued for censorship and “military attacks on the partisan media.” But his comments on the availability of semi-automatic guns, like the AR-15 used to murder seventeen people at Marjory Stoneman Douglas High School, were more than a little shocking (video below):

“I support the Second Amendment. I do not support the cherry-picking we’re seeing of it right now. […] I’m a gun owner. I know guns. My family’s a gun family going way back. But these weapons – AR-15 and similar weapons – are not for sporting purposes. You don’t take them hunting because they’re meant to tear bodies apart. They tear up the meat. They’re lousy for target shooting. They’re not even good for defending your home in the middle of the night against an intruder.”

And Peters didn’t stop there. He recognized that “my position is unpopular to many Fox viewers,” but that this is “a moral issue. It’s an ethical issue. It’s about dead children.” And he even defended the officers in Parkland who failed to enter the school as it was under assault saying that:

“Having those weapons in civilian hands is absolute madness. And by the way, those four deputies who didn’t go into the school. I think I can tell you what happened. They’re outside with handguns and they’re hearing that semi-automatic fire inside. Pop, pop, pop. It’s like going in there with bare hands.”

Peters also discussed the vagaries of the Second Amendment noting that gun fetishists always leave out the part about a “well regulated militia.” He mocked that omission by observing the hypocrisy of the amendment’s staunchest supports who insist on absolutely literal interpretations of the Constitution, but ignore that the language only protects the right to bear arms, but not to fire them.

The NRA and the Republican Party better wake up. When you’ve lost the support of someone like Peters, you pretty much have to acknowledge that your position is just plain nuts. Peters cannot be dismissed as a liberal snowflake who wants to confiscate every gun in America. Having been trained for battle he knows that a teacher, or other school employee, is unprepared and outmatched for combat with an opponent wielding an AR-15, even if the teacher has served in the military.

It’s fair to say that Peters is far better qualified to comment on these matters than Cadet Bonespurs (aka Donald Trump), who got five deferments to evade service during the Vietnam War years. And the same goes for cowards like Sean Hannity, Rush Limbaugh, and the rest of the Trump-fluffing media who never served their country in uniform. Make no mistake, Peters is very likely the same right-wing crackpot he has always been. But that only makes these remarks all the more noteworthy and foreboding.

Lt. Col. Peters: "I support the Second Amendment… I'm a gun owner. I know guns. My family's a gun family going way back. But these weapons – AR-15 and similar weapons – are not for sporting purposes. You don't take them hunting because they're meant to tear bodies apart." pic.twitter.com/HsQZXnkmXq