Last year Donald Trump was expected to make a diplomatic mission to Britain. It was called off after he advised Prime Minister Theresa May that he wouldn’t want to go if there would be large-scale protests aimed at him. He tried to get May to insure that no such protests would occur. Of course, she couldn’t do that. And other British authorities, including the leader of the Labour Party and the Mayor of London, both expressed their desire to see Trump’s visit called off. It was. 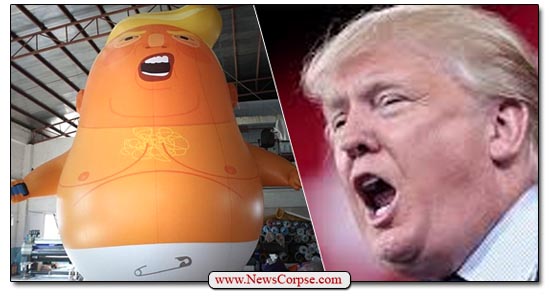 Several months later Trump was again trying to put together a trip. But this time it was canceled after he tweeted a series of flagrantly racist, and provably phony images directed at Muslims.

Earlier this year Trump himself called off a planned visit to the UK due to reports that protesters were prepared to take the streets and greet him at every stop. This time he sought to blame the cancellation on President Obama for a totally absurd and blatantly false reason:

Reason I canceled my trip to London is that I am not a big fan of the Obama Administration having sold perhaps the best located and finest embassy in London for “peanuts,” only to build a new one in an off location for 1.2 billion dollars. Bad deal. Wanted me to cut ribbon-NO!

Ever the persistent world traveler, Trump is now trying to organize a British vacation for early July. However, the British people are no more interested in his presence on their soil than they were before. Demonstrations are being planned to let him know exactly how they feel about him. According to The Guardian as many as 100,000 people will be taking to the streets:

Tens of thousands of demonstrators are expected to march in London, Scotland and elsewhere during his trip, which takes place amid a growing transatlantic trade war and global dismay at the treatment of immigrant families at the U.S. border. […]

“Mass anti-Trump marches have been more than a year in the planning, after May first extended an invitation for Trump to visit the U.K. in early 2017. The largest are planned in London, where organizers of Together Against Trump estimate up to 100,000 people, including labor unions and rights groups, will march through the center of the city to Trafalgar Square.”

But that aint all…

“A quieter but eye-catching protest is planned by Leo Murray, 41, who wants to float a helium-filled blimp of Trump as a baby during the visit.”

‘Moral outrage has no affect on Trump because he has no shame, he’s immune to it,’ said the climate campaigner. ‘But he has a tremendously fragile ego so ridicule is an effective form of protest,’ he said. ‘So we want to make sure he knows that all of Britain is looking down on him and laughing at him.'”

This is pretty much the reception that Trump would get anywhere he traveled in the world. With the possible exceptions of Russia and North Korea, where the leaders and the people share his affinity for totalitarian bullies. And if Trump thinks that he’ll be received with cheers and get to ride in a golden carriage, he is going to be bitterly disappointed. But he will likely say that he was treated like a king, and his followers in the U.S. who are watching him on Fox News, will believe it.