On Saturday Donald Trump took a trip to California to see for himself the devastation caused by the fires that have taken dozens of lives and destroyed thousands of homes. It was a purely PR affair that he thinks will make people forget his insensitive threat – while people were still suffering – that he would make “no more Fed payments” to the state. Those were his first public comments on the conflagration that he absurdly blamed on poor forest management. 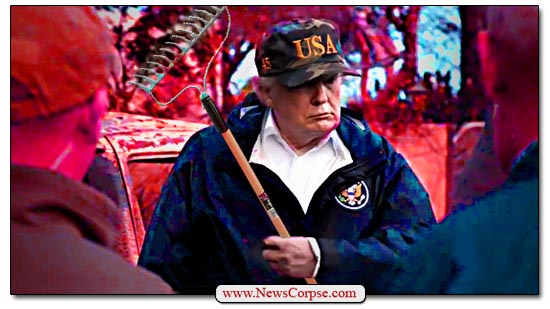 Apparently someone on his White House Nanny Brigade eventually convinced him that insulting the victims was a bad idea. Particularly since his assessment was so idiotic and ill-informed. He was schooled by everyone, from the head of the California firefighters union (who called Trump’s comments “demeaning”), to prominent scientists, that forest management had nothing to with this blaze and that “raking the forest floor,” as Trump advised, was a ludicrous proposal to prevent future tragedies.

So Trump boarded Air Force One and ventured off to the West Coast that he is so fond of disparaging. He brought along a few Republican Nationalist Party pals, but no Democrats were among the delegation. Although he did meet with California’s Governor Jerry Brown, and Governor-elect Gavin Newsom (who was married to Don Jr’s current girlfriend), both of whom are Democrats that Trump has frequently and viciously maligned. And afterward he posted a video on Twitter of his time in the Golden State:

Incredible to be with our GREAT HEROES today in California. We will always be with you! pic.twitter.com/B1MCTF83Zf

Well, isn’t that a pretty propaganda piece? Complete with emotional music and heart-tugging scenes of destruction and the charred remains of people’s lives. What less would you expect from the White House whose new Deputy Chief of Staff for Communications is Bill Shine, the former president of Fox News? This is exactly the sort of Trump-fluffing disinformation that Shine was brought aboard to manufacture. The public relations purpose of this video is painfully obvious. Along with the burnt out buildings and countryside, it featured numerous clips of Trump standing near some piles of ashes and conferring with firefighters as if he were actually directing these “great heroes” on how to proceed.

However, there is something fairly important that this video has left out. There is not a single shot of any of the victims or survivors of the fire. There are no images of Trump consoling the people who were hurt or meeting with those who lost their life’s possessions, work, or family. The absence of Trump engaging in activities that any other normal person would regard as essential – or human – under the circumstances is emblematic of his profoundly callous and neglectful behavior throughout his public life. And it underscores his comments to date that belittle the victims and distort the reality of the tragedy and its causes.

In his own words, this experience in no way altered Trump’s stubbornly twisted view of the world. He told reporters that it didn’t affect his opinion about climate change, which experts agree was a critical factor in these fires. But he did utter this rhetorical mutation: “I want great climate,” as if it were something that could be served up like a cup of coffee or built in a factory. And he reiterated his nonsense about forest management, comparing California’s situation to Finland, a tiny frozen nation that gets more than 200 days of rain annually, with sixty-four of those days in the summer. Even Finland disputed Trump’s comparison.

That’s the sort of ignorance that America has to put up with every day. But on days when Americans are grieving over painful losses it would be nice if we had a president who wasn’t so selfish and uneducated and bullheaded about his factless prejudices. Instead we are stuck with Trump and his Fox News production team making these lame videos for an audience of dimwits who think they display leadership.