As Donald Trump begins another week of disastrous White House failures, his State TV division (aka Fox News) struggles to turn mountains of presidential manure into a sweet smelling garden of blooming propaganda. The week begins with Trump bellowing “You’re fired!” at his Secretary of Homeland Security for not being sufficiently cruel. But that bit of reality TV melodrama isn’t playing particularly well. 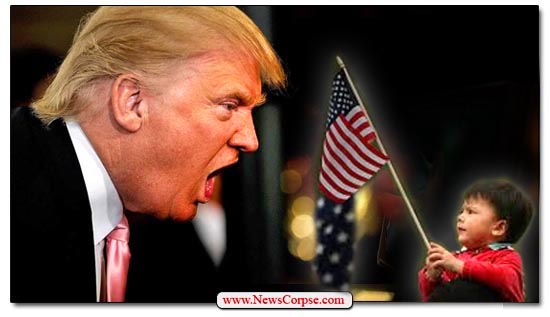 The “Witch Hunt” that Trump is still obsessively whining about continues to be uppermost on his mind and in his tweets. Which makes the ousting of DHS Secretary Kirstjen Nielsen a convenient distraction. She is said to have been pushed out by Trump and his flying monkey sidekick, Stephen Miller. Insiders report that Nielsen was resisting some of Trump’s latest demands to violate the law with regard to asylum seekers and the babies he thinks are MS-13 members.

If this characterization is accurate, Nielsen doesn’t get any credit for finally exhibiting some signs of human empathy after a year and a half of emulating the evil headmistress of a Dickensian orphanage. But it does introduce a new wrinkle into what may be the most nauseating plank in Trump’s platform. His reasons for casting her overboard certify just how repulsive this president can be. And members of his own team are telling tales out of school. Here is what some have confided to CNN about Trump’s family separation policy:

“Sources told CNN that Nielsen tried to explain they could not bring the policy back because of court challenges, and White House staffers tried to explain it would be an unmitigated PR disaster. ‘He just wants to separate families,’ said a senior administration official. […] ‘At the end of the day,’ a senior administration official said, ‘the President refuses to understand that the Department of Homeland Security is constrained by the laws.'”

And there you have it. Trump just wants to separate families. Just like he wants to kill healthcare for millions of Americans, and cut taxes for the wealthy at the expense of working people, and bomb innocent civilians in Yemen, and promote the interests of neo-Nazis, and cozy up to murderous dictators in Russia, and North Korea, and allow the planet to become uninhabitable by driving it to a climate apocalypse.

In the meantime, Fox News is predictably ignoring these signs of the Antichrist in favor of propping up the aspiring tyrant they created, and in many ways, control. Their Monday morning programs were filled with orchestrated rhetoric asserting that the kids in cages that have shocked and saddened most of the nation were actually props employed by smugglers. Lis Power of Media Matters documented several of these scripted rhetorical fallacies here and here and here and here and here. There are simply too many of these nearly identical versions of the same falsehoods to be coincidental.

Clearly Fox News is working hard to undermine any criticism that Trump might suffer for his heartless assault on children and families. And these poor souls were already suffering so badly from poverty and violence in their home countries that they risked their lives to find safety and solace in the land of the allegedly free. Unfortunately, they chose a time when our president was a loathsome cretin who seems to have a bright orange streak of sadism. Hopefully, those of us who still cherish the principles are country propounds will prevail and we will return to being the beacon of light and that has inspired immigrants for over two hundred years.