What is it about life in America today that makes it so easy to feel overwhelmed by societal events yet so securely oblivious to all but the most innocuous? It’s like we are protectively shrink-wrapped in a miracle fabric that lets light in, but keeps heat out. In searching for a parable to explain the current American zeitgeist, there is one story whose web of plots and sub-plots lends itself almost too perfectly. 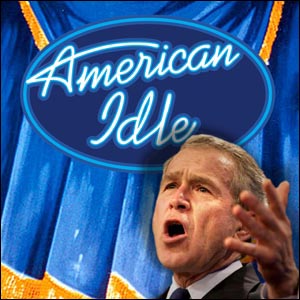 As reported with the customary lascivious glee of the Corporate Media, American Idol judge, Paula Abdul, has been engulfed in a scandal that mirrors the scandalous state of our nation. By engaging in a sexual affair with a contestant whose fate her vote would influence, Miss Abdul has given us the opportunity to understand ourselves more fully and satiate our hunger for controversy. What other recipe gives us all of these tasty ingredients?

Moreover, American Idol itself is an allegory for war. It pits opponents (contestants) and their allies (audience) against one another. And the principle over which this war is fought (talent) is as ethereal as that which inspires many actual wars (religion). As in all wars, the winners write the history, and we are expected to behave in accordance with the outcome. The winner of this televised karaoke is not just the prevailing contestant, but someone we are now required to Idolize. This is the same kind of jingoistic thought control that will get you thrown out of a taxpayer funded presidential forum for flashing a peace sign.

There is an intentional duality of meaning in the title of this article.

Has American Idealism been supplanted by American Idolism? I think so. Contemporary culture in America has just found the perfect combination of nationalism and celebrity worship. Now you know why Fox News is the number one cable news network. Now you know why Ronald Reagan, Jesse Ventura, and Arnold Schwarzenegger were all elected to positions of power. Now you know why Clinton’s lies about sex got him impeached, while Bush’s lies about weapons of mass destruction got him reelected.

Now, don’t get me started on the Apprenticization of America.

One thought on “The American Idolization of America”