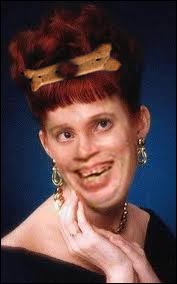 After much searching I have been able to acquire a picture of Glenn Beck’s daughter. I am making this picture available in the spirit of full transparency, although I hope she never wears any clothing that is actually transparent. Just look at her. Calling her a pig would be insulting to pigs. This is someone who could be justifiably confined to a crawl space in the attic to protect the sensitivities of the rest of civil society.

That said…Please rest assured that the foregoing was meant to be facetious in order to make a point. Last week there was a very public feud between Glenn Beck and the McCain family. It erupted after Beck broadcast a prolonged and insulting segment wherein he mocked John McCain’s daughter for appearing in a public service announcement to bring awareness to skin cancer, which both of her parents have had.

Beck spent much of the segment pretending to vomit into a trash can at the sight of Meghan McCain. He and his radio zoo cronies relentlessly made fun of her appearance without ever acknowledging that she was doing this on behalf of an important charitable cause.

This isn’t the first time Beck has ventured into insulting the children of his political opponents. He and his crew previously attacked the intelligence of President Obama’s eleven year old daughter, Malia, calling her stupid. The outcry following that incident resulted in Beck making this apology:

“I broke my own rule about leaving kids out of political debates. The children of public figures should be left on the sidelines. It was a stupid mistake and I apologize – and as a dad I should have known better.”

Remember, this is the same man who once called, on the air, the wife of one of his radio competitors two days after she had suffered a miscarriage and “joked” that “he [her husband] can’t do anything right.”

Meghan wrote a brilliant response to Beck that he ought to take to heart, if he has one. Noting that he has daughters of his own she wrote that…

“There really is no need to make something like my participation in a skin-cancer PSA into a sexist rant about my weight and physical appearance, because I’m going to let you in on a little secret, Glenn: you are the only one who looks bad in this scenario.”

Glenn Beck likes to portray himself as a devout Christian who advocates standing for strong family values. Apparently his idea of values includes repulsive and hurtful insults to people who are performing actual acts of charity. I hope he recalls this incident when one of his daughters comes home crying because they were made to feel ugly by some jerkwad who is just like their dad. But I doubt he has learned anything because he went on Bill O’Reilly’s show Friday and refused to apologize.