As I did a week ago with an article by Hugh Hewitt, my headline for this article is taken verbatim from one by John Nolte, editor-in-chief of Andrew Breitbart’s BigHollywood.

This article appeared on BigGovernment and it is great news. The rightist meme that Republican candidates should not participate in debates sponsored by those they deem the “mainstream” media is growing quickly. I can’t think of anything I would like to see more, with regard to the GOP debate season, than to not see them at all. If they actually had the guts to follow through on this threat it would be a great service to America.

Nolte’s primary argument is that candidates should not “willingly put themselves in a less than ideal situation.” That means not exposing oneself to probing questions that might have the disadvantage of revealing what you actually believe. He continues…

Nolte: Nothing is more important than getting our failed president out of office in 2012 and therefore nothing is more important than nominating someone who can win. This is why the number one quality we should be looking for among our otherwise superb field is someone who understands that when it comes to removing Barack Obama from office, the MSM is the existential threat of 2012 – not the President.

Nothing is more important to Nolte than unseating the current president – not jobs; not health care; not global warming; not terrorism; NOTHING!. And the most important quality that Nolte is looking for in a president is fear of the media – not experience; not leadership; not wisdom; not honesty; FEAR! That is the modern GOP in a nutshell (with an emphasis on the nuts). They have NOTHING to offer but FEAR.

Nolte wants the GOP field to stage their own “New Media” debates with folks like Jonah Goldberg and Rush Limbaugh asking the questions. Me too. Does Nolte think that this group won’t ask about issues like abortion or Medicare or the budget? If anything, I think they would be even more confrontational as they seek to elicit loyalty pledges from the candidates to establish their extremist bona fides. But in Nolte’s view, the purpose of the Republican debates should be to “make our side look as good as possible” and to “do as much political damage to President Obama as possible.” Oh yeah, he did throw in that they should also “help primary voters make a difficult choice.” How that would occur while in the midst of a GOP fluffing, Obama bashing festival is unclear.

Now along with Hugh Hewitt, we have Andrew Breitbart’s web site calling for a media embargo by Republican candidates. Sarah Palin has previously made similar remarks. They may be surprised to learn that I agree with them completely. I hope they have the courage to follow through, but I doubt it. That kind of strength and integrity is not what the GOP is known for.

As an aside, I have been following the Breitbart’s BigGovernment web site since the Anthony Weiner story broke. It has now been 17 days and still… 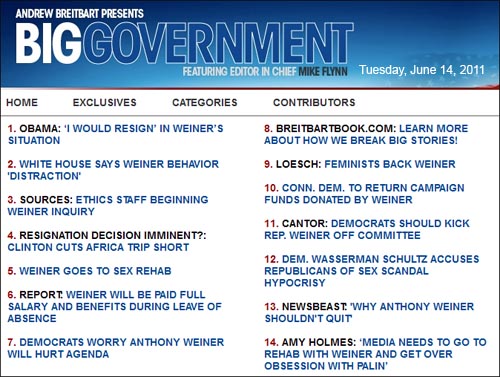 EVERY SINGLE HEADLINE at the top of the page (with the exception of a plug for Breitbart’s lame book), is about Weiner. There is a word for the kind of psychosis Breitbart is exhibiting: Obsession.