As the 2012 campaign season continues to roll out, here’s something you won’t hear in much of the mainstream media: 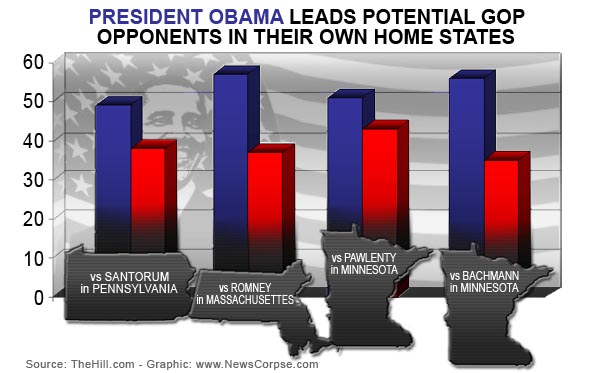 The people who know these Republican candidates best prefer President Obama. These senators, governors, and congressmen served for years representing their constituents, yet those constituents were apparently not impressed.

Other Republican who have been the subject of speculation (Chris Christie of New Jersey, Herman Cain and Newt Gingrich of Georgia, Sarah Palin of Alaska, and Rick Perry of Texas) are also notably unpopular at home. The same is true for GOP governors (Rick Scott of Florida, John Kasich of Ohio, Scott Walker of Wisconsin, and more) for whom voters in their states are experiencing buyer’s remorse.

The rest of the nation should take this into account as the campaigns proceed.