All it takes is a fluke victory in Massachusetts for Fox News pundits predict the demise of the Democratic Party. In the days since Scott Brown won the special election for the Senate the conservative press has been unreservedly giddy. They have proclaimed the end of everything from health care to the Obama presidency. The only problem is that nobody told the voters.

A poll from that bastion of socialist twaddle, Fox News, shows that Barack Obama is preferred over every Republican they surveyed against him.

On top of that, the Tea Bagger phenomenon is turning out to be the biggest bubble since the tulip mania. As I wrote in The Tea Party Delusion, the popularity of the movement is largely a mirage created by the media (i.e. Fox News). Almost half the country doesn’t even know they exist. In this new poll from Fox, they match Obama against a generic candidate from the Tea Party and Obama wins by more than two to one (48% to 23%). Even amongst Republicans a majority (54%) reject the Baggers.

Perhaps the rumors of the President’s demise are highly exaggerated. The significance of these results in a poll from an overtly hostile source cannot be understated. By the same token, the lesson of the Massachusetts race is that overconfidence is a dangerous extravagance.

The 2012 election is still 34 months away and the stable of potential opponents have a not-so-secret weapon: Fox News. Yes, the network that commissioned this poll actually employs four prospective GOP candidates. In addition to the two surveyed here, Palin and Gingrich, they also have Mike Huckabee and Rick Santorum on the payroll. It is unprecedented that a so-called news enterprise would actually employ so many electoral adversaries from the same party, or for that matter, any party. You have to wonder if Romney, Tim Pawlenty, and Bobby Jindal feel left out.

The association with Fox could prove valuable over the next two and a half years. The Fox Farm Team will have an opportunity to rack up a lot of free practice time on the air. That exposure, along with the rest of Fox’s advocacy for the rightist agenda, is an expensive asset that will only be afforded to members of the team. 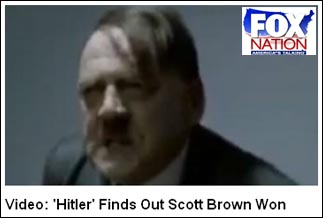 And the coaching staff at Fox is already preparing the field. Fox Nation took the occasion of Brown’s victory to promote a video that portrays Democrats as despondent Nazis being berated by their leader, Adolf Hitler.

In the run up to the 2008 election, and in the year that followed, there were many complaints about the right-wing’s hyperbolic attempts to associate the President with Hitler, Stalin, or Marx, and despite the documented evidence of it, Fox always tried to dismiss it as overzealous opponents. But this video is unambiguously making the Nazi correlation and it is prominently featured on the Fox Nation web site. And it’s not the first time:

The campaign for 2012 is clearly in progress and Fox is implementing their most aggressive and dirtiest game plan. But according to their own poll it isn’t yet having much of an effect. The operative word there is “yet.” If there is one thing that Rupert Murdoch, Roger Ailes, et al have in abundance it is patience. This is just the bottom of the second inning and they have plenty of pine tar left to apply extra spin to the ball.

6 thoughts on “Fox News Poll: Obama Beats All Republicans In 2012”