OK – Don’t laugh. Glenn Beck has announced that the location of his August 24 “Restoring Courage” rally is being moved because he is afraid that there might be violence. So before the event heralding Beck’s celebration of courage even begins he succumbs to a fear of some unspecified threat.

This is precisely the reason that the word “irony” was coined by some prescient ancestor. Beck said that his security team was “a little nervous” about a report that 40,000 Muslims would be just up the hill from him (yeah, sure). He talked about the risk due to the volatility of the region and a warning that in the Middle East, “these people play for keeps.”

Did Beck just become aware of the fact that Israel has been the target of terrorism and a hotbed of hostility? Did he really plan his big party without ever considering the notion that bringing his arch-conservative message and disciples to a place that is regarded as holy by feuding religions might pose a bit of a security challenge?

Actually, Beck says that he did consider this and opted to do it anyway. He says his change of heart is partially due to the risk that would be assumed by others in his entourage. That’s very considerate of him except, why wasn’t he worried about them prior to this? Did Israel just get dangerous last week? Why does he say now that potential violence could spark a war, but he never considered that a problem before?

I think Beck is right in a way. He definitely represents a security risk to Israel due to his overt hatred of Muslims and his frequent stereotyping of them as terrorists and conspirators of a grand, global caliphate, in conjunction with European socialists and American progressives. I’m surprised the Israelis even approved of the event. Beck once said, in a moment of inspired idiocy, that 10% of Muslims are terrorists (that would be about 160 million Muslims) and they want to summon the anti-Christ and bring about the Apocalypse. Which is funny, because that’s what Beck seems determined to do. 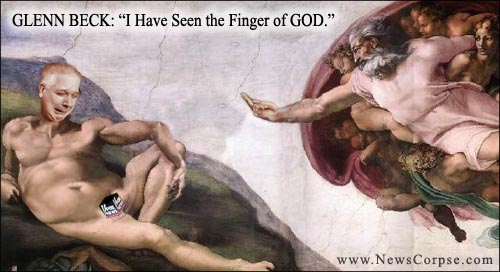 Beck is certain that he is guided by God. He delivered a delusional speech in April of 2010 wherein he revealed that “God is giving a plan to me.” And with regard to this event in Israel, he implied today that God had a hand in that as well:

“When I picked this location, I didn’t pick it. I truly believe it was selected for me. I don’t think I really had a choice.

But now Beck is changing the location of his Courage-palooza out of fear. Is he defying God’s will? It wouldn’t be the first time. God has made it clear what He thinks of Glenn Beck. God is pissed! He has said so unambiguously. Deuteronomy 28:27-29, describes the punishment from the Lord if you should fail to follow his laws:

The specificity is uncanny. We hardly need to speak of Egypt and how badly Beck botched that. The emerods (or hemorrhoids) he has already had, and it nearly killed him. The potential blindness he announced tearfully last year. The madness is self evident. Even his prosperity is being plundered as his television program was canceled and numerous radio stations have dropped his show. We are seeing prophecy fulfilled.

6 thoughts on “A Fearful Glenn Beck Is Moving His Restoring Courage Rally. Really?”