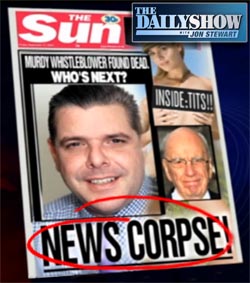 Over the past couple weeks News Corpse has become a worldwide sensation. Ever since the News of the World story broke, this web site has enjoyed significantly greater popularity.

It first became noticeable on Twitter as numerous clever Twits thought they all had invented the name. It was then retweeted endlessly and became a popular hashtag.

Now it has been launched into the stratosphere as the Daily Show’s Jon Stewart latched onto it in his report on how Fox News is covering (or rather, covering up) the Murdochalypse story. But he wasn’t the first television star to appropriate my identity. Keith Olbermann paid homage to me last year when reporting on Rupert Murdoch’s million dollar donation to the Republican Governor’s Association.

I don’t know whether to feel flattered or call my lawyer. If I could get a $1.00 from everyone who used the #NewsCorpse hashtag I’d have a bunch more dollars than I presently have. Better yet, if those who are enjoying my name were to buy a few stickers from me, then I’d get paid and you’d have some cool stickers. Just take a look at the items at the top of the sidebar to your right (i.e. Freak Show, Choose Your Weapon, Harmful If Swallowed, etc.), or go to Crass Commerce.

I acquired this domain name seven years ago, long before the current trendiness, in order to expose and mock right-wing media (which is most of it). It’s been enormously fun and satisfying to have an impact on reforming a pitifully broken mediasphere. July 18 was News Corpse’s seventh birthday. In that time I’ve written over 4,000 articles and done hundreds of original works of art. So anyone who wants to get me a birthday present can just purchase some stickers too.

Thanks to all my readers. Thanks to those who work to clean up the media environment. Thanks to the Twitterati. Thanks to Keith Olbermann. And now, my sincerest thanks to Jon Stewart. Don’t worry, I won’t sue you.

7 thoughts on “News Corpse Is Blasting Off”