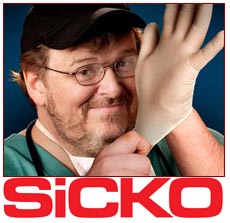 “Heavily Doctored” by MTV’s venerable newsreader, Kurt Loder, is an embarrassingly flawed and tendentious attack on Michael Moore’s new documentary “Sicko“. This tediously protracted diatribe is neither a review nor a balanced examination of the important public policy issues raised by the film.

The article begins with Loder reciting several of the health care horror stories exposed in the film. His tone is deceptively favorable as he describes the purpose of good muckraking. But it doesn’t take long for him to plant his ideological flag. After alleging that Moore is a brazen con man who cherry-picked facts and manipulated interviews, Loder lobs this rhetorical grenade:

“As a proud socialist, the director appears to feel that there are few problems in life that can’t be solved by government regulation…”

Moore regularly articulates his pride in being an American – and one who advocates the fruits of capitalism for himself and all Americans. But Loder doesn’t stop with this ad hominem insult. He continues with the utterly false and unsupported (and prejudicially phrased) assertion that “Americans have never been keen on socialized medicine.” Someone needs to introduce Loder to the most popular government-managed programs ever created – Social Security and Medicare. Additionally, polls show that Americans would overwhelmingly approve of a national health insurance program, even if it would require higher taxes (64% for, 35% opposed).

Still, Loder persists in mischaracterizing the reality of the health care crisis and the response to it in the United States and around the world. In a rebuttal to Sicko, he offers up a short and undistinguished 2005 documentary called “Dead Meat.” This film is the flip side of Sicko, recounting alleged horror stories of government-managed health care. Although he devotes six paragraphs to the film, Loder neglects to provide some illuminating facts about Dead Meat and it’s producers.

The film made its debut at the Liberty Film Festival, which describes itself as “a forum in the heart of Hollywood for conservative and libertarian filmmakers.” In 2006 the festival operations merged with ultra-right wing provocateur David Horowitz‘ Freedom Center.

The film’s credits include special thanks to the rightist Manhattan Institute, the Pacific Research Institute, and the Heartland Institute. The latter is particularly notable for its refusal to acknowledge the dangers imposed by global warming or smoking – both of which they feel are frauds based on junk science. All three institutes are partially funded by pharmaceutical companies or lobbies.

The producers have also released films critical of immigration reform protests and what they perceive as a left-wing assault on free thought in U.S. universities.

Health care expert, Loder, doesn’t hesitate to dispense advice on policy matters. His prescription for reform is firmly planted in the free-market medicine camp. And despite the fact that there is nothing identifying this article as an editorial, it is overflowing with opinion and innuendo. Here is another example of his insertion of bias that is presented without context but with the expectation that we accept it on faith:

“When governments attempt to regulate the balance between a limited supply of health care and an unlimited demand for it they’re inevitably forced to ration treatment.”

Loder doesn’t seem to appreciate that there is no system that produces a greater degree of rationing than one that denies care to all but the fortunate. The kind of system that is presently in place in the U.S.

The rest of the article provides incontrovertible evidence that, in addition to being an inferior analyst and a prejudiced observer, he also lacks any sign of a sense of humor. He totally misses the satirical points made in episodes involving French excesses in care and the now famous Guantanamo landing. As such, Loder proves that he is ill-suited for this type of assignment. His readers would be better served if he would just put his sunglasses back on and take his mark on the red carpet in time to welcome back the Spice Girls.

Update: I was just alerted to this column wherein Loder predicted that “An Inconvenient Truth” would win the Oscar for best documentary:

“Actually, the best film in this category is Amy Berg’s devastating “Deliver Us from Evil,” a true investigative report on a shameful cover-up by the Roman Catholic Church of 20 years of child-molesting by one of its priests, Oliver O’Grady. But Al Gore’s environmental alarmism – much of it since heavily questioned – no doubt plays better in Beverly Hills.”

Loder is apparently fully subscribed to the anti-science, free market philosophy of the three institutes cited above (whom I will now refer to as the “Dead Meat Coalition” because that perfectly describes the contents of their craniums).