The chart below tells the story for the past four quarters. While still in third place, there is no cable news network that is growing faster than MSNBC in primetime (Mon-Fri). 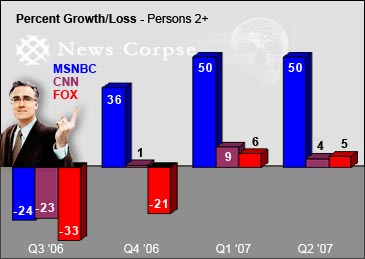 And, as usual, MSNBC’s growth is powered by a surging Countdown with Keith Olbermann. The most recent quarter continues a pattern of Countdown battering away at The Factor’s lead, just as it has been doing for the past year. The numbers for the 25-54 demo show the same trends. 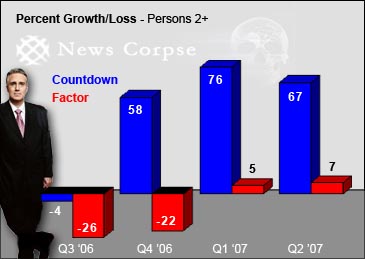 It is no wonder that Olbermann is drawing crowds. His “Special Comments” are an inspiring rarity in television news. And the latest one delivered last night is no exception. In fact it may be the best yet. Calling on Bush and Cheney to resign, Olbermann spells out the universal disconnection between this president and the people he is failing to serve.

5 thoughts on “Another Runaway Quarter For MSNBC”