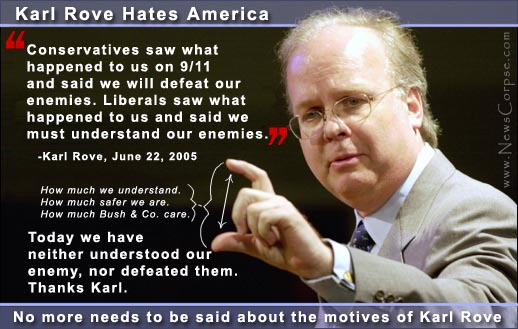 For those who think the President has raised prevarication (that means disassembling) to new heights, today we were witness to a lesson from the President’s Guru.

Karl Rove, in a speech to the Conservative Party of New York State, showed what it takes to make a truly repulsive ass of oneself. With the quote featured here, Rove manages to insult all Americans, including the survivors and families of 9/11, yet still demonstrate how much he and his ilk value ignorance.

First, the record should be clear that all Americans were equally outraged and determined to seek justice for the attacks on 9/11. Rove’s remarks are entirely without foundation and were made deliberatly to create a division within our nation. Adding this rhetorical fuel the divisiveness that already burdens our citizens makes it that much more difficult to resolve the problems we face domestically and internationally, including the war on terrorism. It is a kind of treason that seeks to divide, in order to secure a purely political conquest at the expense of our soldiers, families, and global reputation.

This administration has proven, once again, that intelligence is not its strong suit. But this time they did it by disparaging a broad swath of America’s populace. This time they demonstrated conclusively that they care more about partisanship than unity. This time Rove goes beyond impugning the motives of his political opponents: 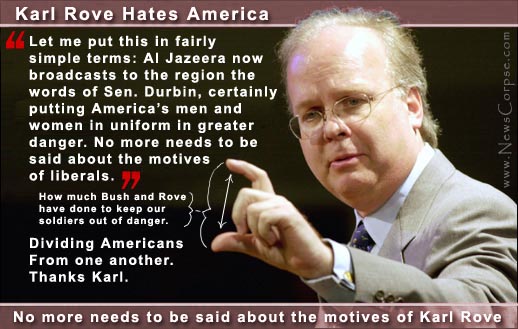 This is his clear statement that he believes the motives of liberals are to put “America’s men and women in uniform in greater danger.” No more needs to be said about the motives of Karl Rove.

The past week saw a virtual firestorm from the press as it fluttered excitedly about Senator Durbin for having, accurately, recounted FBI reports of torture being inflicted by interragators at Guantanamo. Will the press apply the same standard to the White House? I wish I could say I was optimistic, but…..oh, come on.