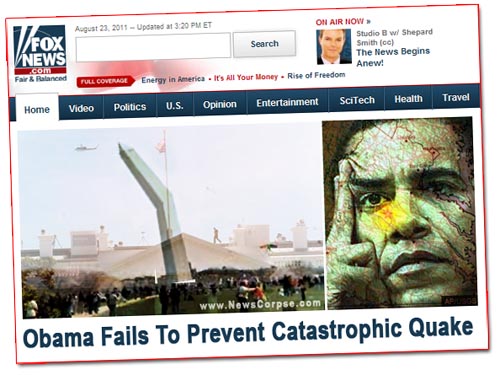 The massive 5.9 earthquake that struck Washington, D.C. and caused panic throughout much of the east coast is causing rumblings across the political landscape as well.

Republicans have stepped forward to criticize President Obama for not having an effective anti-earthquake policy.

Michele Bachmann: In my administration I can promise you that, in addition to $2.00 gas, there will be no earthquakes.

Rick Perry: As I have said before, there are some problems that Washington cannot solve. That’s why I am calling for a day of prayer to bitch at God for causing these earthquakes.

Mitt Romney: If an earthquake destroyed my home in New Hampshire, I could easily relocate to California or Colorado or any of my other luxury residences. That’s why we have to run the government like a business and build several Washingtons around the country.

Herman Cain: When I ran Godfather’s Pizza I learned to be prepared for everything. After all, science knows that this ObamaQuake was caused by lunar cycles that stretch the earth’s crust like the tides. Now we have to watch out for Sue Nawmee.

Ron Paul: Audit the Federal Reserve and abolish all regulations and we wouldn’t have any problem with an earthquake every now and then.

Sarah Palin: In these troubling times the good patriotic citizens of our rich heartland know that America’s greatness relies on having real leaders who love their country and do not pal around with tyrannical tectonic plates.

Glenn Beck: Thank God I’m in Israel today. The far-left, and their cohorts in the Muslim Brotherhood, have infiltrated the political class in the Capital and the time has come for them to receive the vengeance of the Lord. And if you want to see this all happen live, be sure to sign up for GBTV right away.

Yet the media had several hours of blanket coverage of an earthquake that caused no injuries and did no significant damage. Stay tuned for more coverage – of Casey Anthony.