In the fiercely competitive world of cable news, the players have been jockeying for position as they battle for viewers and advertisers. Fox News, MSNBC, and CNN, each with their own models of programming, seek to gain scale and influence. 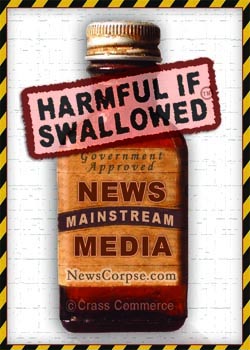 Fox News, we know, has established its place as the leader in right-wing advocacy and Republican PR. MSNBC, while not a full-fledged counter to Fox, has allotted a fair portion of its programming to more liberally leaning fare. But CNN, the innovator and one-time leader in cable news, has wavered between those poles emerging as somewhat of a journalistic mutant – neither left nor right nor neutral.

The past year, however, CNN has been attempting to fashion a more recognizable persona. The shift coincides with the promotion of Ken Jautz, formerly the president of CNN’s sister network, HLN. At HLN Jautz succeeded in raising both ratings and revenue by turning the channel into a trashy TV tabloid reliant on celebrity gossip and characters like Nancy Grace and Glenn Beck (yes, Jautz gave Beck his first job on television).

Now presiding over CNN, Jautz has brought his brash and distinctively commercial style to the network that once aspired to be a model of journalistic integrity. He is employing the same sensationalist philosophy at CNN that brought him success at HLN, along with a decidedly conservative bent. In an interview he gave after his promotion was announced Jautz delivered a tribute to Fox News and a preview of what to expect from his tenure saying that he does not believe that “facts-only” programming will work. True to his word he has endeavored to give CNN a shiny Fox-like hue and assembled a team that shares his aversion to facts.

Here are some examples of the lowlights of the Jautz era at CNN:

1) First and foremost, Jautz brought Glenn Beck into the CNN family saying that “Glenn’s style is self-deprecating, cordial…not confrontational.” That sort of delusional analysis ought to have been a red flag that disqualified Jautz from running a news network.

2) Erick Erickson, the RedState blogger who once called Supreme Court Justice David Souter a Goat-f**king child molester, became a CNN political commentator. Since his hiring he has cheered the S&P’s downgrading of the U.S. credit rating and agreed with Rick Perry that Social Security is a Ponzi scheme.

3) CNN signed Dana Loesch, the editor of Andrew Breitbart’s BigJournalism, to be a contributor. Loesch has alleged that President Obama “sided with terrorists,” and she embraced the overt bigotry of notorious Islamaphobe Pamela Geller. Breitbart, of course is famous for promoting deceptively edited videos that smeared ACORN, NPR, Shirley Sherrod and even CNN reporter Abbie Boudreau. Loesch was hired by CNN after these events were widely known.

4) Jautz brought Erin Burnett over from CNBC. In her debut she broadcast a story that portrayed the protesters on Wall Street as unfocused neo-hippies that didn’t understand the issues they were protesting. Burnett would have fit in well on the curvy couch of Fox & Friends where they routinely disparage the movement without ever addressing the substance of it.

5) CNN had the distinction of being the only network to air Michele Bachmann’s Tea Party response to the State of the Union Address. Even Fox didn’t think it was worthy of live coverage. The result is that CNN had two opposing viewpoints to the President’s address, one from the GOP and one from the Tea Party which, of course, is just an affiliate of the GOP. We’re still waiting for CNN to air a response from the Progressive Caucus or MoveOn.org.

6) Another new CNN political analyst is Will Cain, who CNN acquired from the ultra-conservative National Review. And if that credential isn’t far enough out in right field, Cain just announced that he is joining Glenn Beck’s web site, The Blaze.

7) CNN locked arms with the Tea Party to co-host a Republican presidential primary debate. By choosing Tea Party Express as their partner they embraced a dubious organization that was booted out of the Tea Party Federation due to the racist commentaries of a spokesman. It was also revealed that most of the funds raised from donations wound up in the coffers of Russo, Marsh, the Republican PR firm that founded Tea Party Express.

8) Former Fox News anchor and Bill O’Reilly fill-in, E.D. Hill, is now a CNN contributor. Hill was dumped by Fox after a segment that showed President Obama giving the First Lady a friendly fist bump and Hill called it a “terrorist fist jab.”

So CNN is now employing Fox News rejects, Andrew Breitbart lieutenants, and Glenn Beck associates. They’ve entered into covenants with unscrupulous Tea Partyers. On the flip side, former CNN reporters Ed Henry and John Roberts are now comfortably ensconced at Fox News. The lines between CNN and Fox News are blurring to the point where the networks are becoming indistinguishable. And most of this occurred since Ken Jautz assumed the helm of CNN.

If there is one thing that American media doesn’t need, it’s another Fox News. The first one is already doing a stellar job of misinforming the public and advancing the agenda of the Republican Party. What’s more, emulating Fox has done nothing for CNN’s ratings. Why should it? Viewers who are in the market for dumbed-down histrionics, Democrat bashing, and a steady diet of right-wing falsehoods, already have a proven provider. Fox’s audience has shown that they are not the least bit interested in looking for the remote that slipped under the sofa years ago. They don’t even change the channel when their heroes are just a click down the dial.

Consequently, if CNN is gaining nothing from reshaping their editorial slant to mirror Fox, the only conclusion is that they are deliberately making a hard right turn because that is the direction they want to go. But this path has only resulted in their dropping to third place behind Fox and MSNBC. If CNN ever hopes to regain some of the luster of their glory days, they will need to differentiate themselves from Fox. They might want to take a stab at journalism. That would be novel in these days of advocacy tabloidism.

10 thoughts on “The Foxification Of CNN: New Management Pushes The Network Into Crazy Territory”