It was a blustery November morning. I was in my mother’s basement Tweeting waffle recipes to chums in my Marxist study group. My fingers were still sticky with maple syrup. Then she walked in. Or rather, she showed up in my Google news alerts. Her name was Winter, and it fit her like an Old Navy Fleece hoodie. Jana Winter. She said she was a reporter for Fox News. I should have known right then that she couldn’t be trusted. Everyone knows there aren’t any reporters at Fox News. 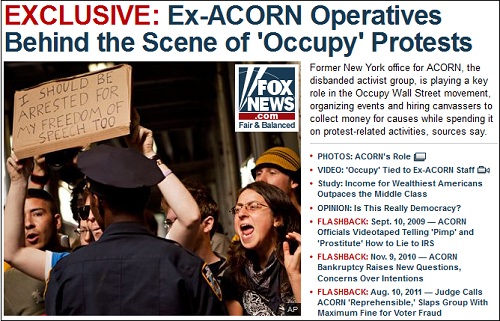 Winter had been writing articles about how ACORN, the group of community organizers that ceased to exist more than a year ago, was secretly still operating and was behind the Occupy Wall Street protests. Her stories were obvious fabrications that posed absurd theories wherein the bankrupt ACORN could somehow afford to pay homeless people tens of thousands of dollars to attend rallies that were already populated by thousands of genuine protesters who attended for free.

Winter wrote three progressively more delusional articles on this subject in as many weeks. She was able to be so prolific because she never bothered to gather any actual evidence or testimony from anyone other than anonymous sources. The first article laid out the imaginary ACORN plot to subvert capitalism from beyond the grave. The second alleged that the resurrected ACORN, spooked by Winter’s first article, scrambled to destroy every remnant of its reincarnated existence. Once again, almost every assertion was absent an attribution. Winter is a master at coaxing incriminating confessions from ghosts.

But it’s the third article that reveals the depths of Winter’s deviousness. After laying the groundwork for a scandalous tale of corruption and clandestine schemes, Winter’s latest composition divulges the efforts of Darrell Issa, Congress’ self-appointed hall monitor, to bully the Department of Justice into launching an investigation of the gossip spread in Winter’s columns:

“In a letter dated Monday, Issa, R-Calif., called for U.S. Attorney General Loretta Lynch of the Eastern District of New York to launch a probe into allegations first reported by FoxNews.com.”

Notice the meticulous attention to journalistic precision in Winter’s description of Loretta Lynch as the Attorney General. That would be an interesting detail if it happened to be true. But even more interesting is the way she refers to “allegations first reported by FoxNews.com” without noting that she is talking about herself. It was her own reporting from which Issa derived his accusations of scandal. Several times in the article Winter cites “reports from FoxNews.com” and even noted that “Issa’s letter quotes from the initial FoxNews.com report.” Later Winter added that “Issa also referenced a second FoxNews.com report.” That second report was also Winter’s handiwork.

So what we have here is a circular wheel of affirmation wherein a Fox News “reporter” invents a phony scandal by writing thinly sourced articles that allege fraudulent activity by a defunct organization. Then a United States congressman cites those articles as evidence that an investigation should ensue. Then the same Fox News reporter writes an article about the congressman’s request for an investigation. I suppose that the next thing we’ll see is Issa citing the Fox News report on members of Congress demanding that the Justice Department investigate. And around it goes.

To be clear, there is absolutely no evidence of any wrongdoing by the non-existent ACORN, the New York Communities for Change (NYCC), whom Winter and Issa are slandering, or the Occupy Wall Street movement. Winter’s articles contain dozens of citations from anonymous sources that are uncorroborated. Yet in the latest article she doesn’t even bother to attempt to interview anyone representing the other side of Issa’s baseless accusations (fair and balanced?).

To her credit, Winter notes the inherent problem with bias in the media on the part of influential news enterprises:

“A leading force in online journalism appears to be making a strong effort to be anything but fair and balanced.”

The only problem is that she is not referring to the bias in her own reporting. That quote was from an article she wrote last month criticizing Arianna Huffington for “injecting her endorsement of the demonstrations into her media outlets’ coverage of the events in lower Manhattan.” It’s another proud moment for Winter who has somehow managed to out Huffington as a liberal. Who knew?

Winter has a bright career ahead of her, so long as she stays at Fox News. She doesn’t know who the Attorney General is. She doesn’t know that the Huffington Post is not a neutral media outlet. She doesn’t know how to compose an article without relying solely on anonymous sources and right-wingers. She doesn’t know that it’s bad form to cite herself as a source for subsequent reporting without disclosure. Best of all, she is not the least bit embarrassed by exhibiting her ignorance in public. If she’s an attractive young blond then she is everything Fox News could hope for.

And therein lies the mystery. Why isn’t she already appearing as part of Bill O’Reilly’s harem? Why hasn’t she filled in for Gretchen Carlson on Fox & Friends? Does Megyn Kelly have some nasty dirt (or dirty pictures) on her? Who can say? As for me, I’ve got bigger fish to fry and can’t be distracted by every dame that Fox throws in my path. Winter’s a big girl and can take care of herself. She’s demonstrated her willingness and ability to peddle Fox’s snake oil with the best of them. And she is adept at feigning being shocked – SHOCKED – to find that there are ACORN shenanigans going on here.

4 thoughts on “Anatomy Of A Fox News Manufactured Political Scandal”