The Occupy Wall Street movement has had a profound effect on changing the topic of debate in this country. A couple of months ago the only subject the media would entertain was the national debt and federal spending. Today the conversation has veered to economic inequities and the abuse of corporate power.

An ancillary to the Occupy agenda that arose a few weeks ago is the call for Americans to Move Your Money from big, impersonal banks, to local community banks and credit unions. That initiative climaxed last Saturday as the day designated “Bank Transfer Day.”

By any measure it was a resounding success. The Credit Union National Association reports that $80 million was moved into their member institutions on Saturday alone. For comparison, the CUNA notes that on an average day in 2010, they opened 1,643 new accounts. On November 5th, they opened 40,000 new accounts. Could anyone have predicted this level of success? 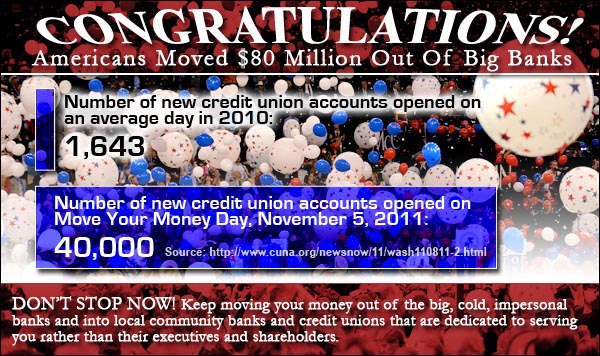 One person whose predictions were typically some distance from reality was Fox News’ Bill O’Reilly. Last Friday he engaged Geraldo Rivera in a debate that ended with a brief discussion of the Bank Transfer Day.

O’Reilly: Let me just tell you something. Nobody’s gonna do that. Number one, those people don’t have any money and nobody’s gonna listen to them because they lost credibility.

Ya think O’Reilly will acknowledge his error now that he has been proven to be a lousy prognosticator? Do you think he will address the fact that 650,000 new accounts were opened in the month prior to Bank Transfer Day? That’s more than the total number of new accounts opened in all of last year. Do you think the big banks will stop pretending they don’t care about customers fleeing because they aren’t profitable customers? Yeah, me neither.