This graphic illustrating the results of a poll for the Iowa Republican primary appeared this morning on the Fox News program America Live with Megyn Kelly. 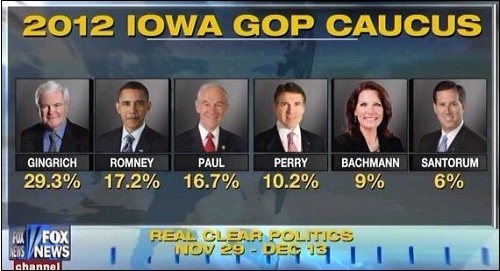 So what is Fox trying to say here? Is it that Barack Obama and Mitt Romney are interchangeable? Is this an effort to make their viewers think that Obama is losing to Newt Gingrich? Or are they just trying to confuse their dimwitted viewers so that they stumble around with vacant stares and do whatever the voices on their television tell them to do?

As I’ve said on the other many occasions when Fox News screws up: These amateurish flubs are typical of Fox’s sloppy brand of pseudo-journalism. It demonstrates their lack of seriousness with regard to reporting and informing the public. What’s more, they are aware of the problem. A couple of years ago they distributed a memo to their newsroom warning of the consequences of continued blunders:

So will heads be rolling at Fox News? Don’t count on it. Fox doesn’t regard these incidents as mistakes. In fact, they are an integral part of their mandate. A mistake would be if they inadvertently allowed something truthful to get on the air. That would be cause for termination at Fox News.