The Fox News web site for “those opposed to intolerance, excessive government control of our lives, and attempts to monopolize opinion or suppress freedom of thought, expression, and worship,” Fox Nation, generally exhibits the same calm, thoughtful, and reasoned demeanor in its presentation of the news as its TV parent. For example, this morning the Fox Nationalists posted this headline story: 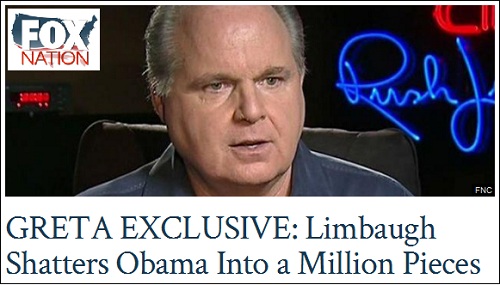 For anyone who didn’t tune in to the interview of Rush Limbaugh by Greta Van Susteren yesterday (which was 99% of the country), what you missed was seeing Van Susteren turn over almost half of her program to Limbaugh. She asked a couple of questions and then let Limbaugh ramble on incessantly in his trademarked hyperbolic manner. And in all of the time he consumed he said nothing more than “Obama sucks,” over and over again.

And speaking of hyperbole, notice the Fox Nation headline saying that “Limbaugh Shatters Obama Into a Million Pieces.” Really? Because the last time I looked Rush is still hosting an AM radio program with an audience of self-described “dittoheads” and Obama is the leader of the free world. But this is typical of Fox Nation. Here is a small sampling of prior headlines that have graced this alleged “news” site:

By Fox News standards any time someone criticizes someone else they are either obliterated, demolished, destroyed, annihilated, crushed, torched, or nuked. Particularly if the criticism is directed to President Obama or a Democrat. And I didn’t even check my thesaurus to come up with other histrionic synonyms Fox might have employed.

The one thread that runs through all of this is how overtly hostile and violent their editorial rhetoric is. Clearly Fox regards their mission as one of war against their ideological adversaries. And given the fact that their audience consists of an inordinate percentage of fairly unbalanced and well-armed individuals, this is irresponsible and potentially dangerous.

As Newt Gingrich once said, the Tea Party is “the militant wing of the Republican Party.” And Fox News is their Clarion Caller.