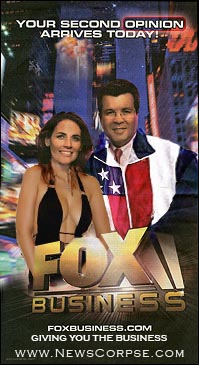 Well, the early reviews are in and they are affirming the net’s vapid approach to journalism as pioneered by the Fox News Channel. First at the gate to critique the new net is its godfather, Rupert Murdoch:

“It’s two and a half to three days old and looks just terrific. Everybody, even in the industry, (recognizes) how different it is to CNBC, which is half-dead,”

You might wonder why Murdoch is spending hundreds of millions of dollars to enter a business whose top performer is “half dead.” And if CNBC, with a potential audience of 90 million households is half dead, than what’s so terrific about FBN which passes only 30 million homes?

[Speaking of terrific: FBN launched on Monday. The Dow was down every day this week. Total loss for the week was 517.06. Coincidence?]

Brian Lowry at Variety has the most humorous take on FBN. And it’s funny because it’s true. Lowry highlights one of FBN’s strengths pointing out that they “trump CNBC’s ‘money honey’ with a veritable money hive.” He mocks the network’s reliance on Stepford anchors in short skirts interviewing patrons of Myfreeimplants.com. But he hits his stride describing the network’s patented political prejudice:

Ronald Grover at Business Week delivers a column that is mostly complimentary, although the features that Grover praises might be considered flaws by most discerning viewers. For example, he is enthralled by a segment wherein anchor David Asman attacks Democrats. Even though he concedes that Asman’s analysis is faulty, Grover says, “Who cares?” because he was entertained by it. I’m not certain that other viewers will be so forgiving. Grover himself engages in some faulty analysis describing why he thinks that FBN will succeed:

“Murdoch clearly wants to bring business to Main Street, NASCAR, and younger folks who like to mix stock chatter with their after-hour cocktails.”

Does Grover really believe there is a huge under-served audience of young NASCAR fans hankering to yak about the stock market? Does Murdoch? If that’s their target demo they might be better off actually launching a patriotic pornography channel. Oh, wait a minute…That would be the Fox News Network.

“They appear to have a rooting interest in prices going up. It’s normally not a good sign of journalism when you’re rooting for an outcome.”

However, the devoutly conservative WebProNews blares, “Fox Business Channel Getting Positve Reviews.” Despite using the plural “Reviews,” the WebPro article only cited one from AP, and that review was hardly a vote of confidence:

“They went on the air, played it straight and people were giving information whenever I tuned in – that’s about as successful as you can be on your first day,”

Further diluting the WebPro case is the fact that the Syracuse University professor quoted above, Robert Thompson, was also quoted in the Reuters article saying:

“I don’t think this will change the entire landscape of American TV as we know it. So far, this morning, it’s not been terribly exciting.”

Not an auspicious week for the fledgling network. But one thing we know about Murdoch is that he is more than willing to wait out tough spots and to deficit finance operations pretty much indefinitely. FNC was in the red for the majority of its short lifespan, and the New York Post has lost money for as long as Murdoch has owned it. If it costs him money to spread his propaganda, he’s got it, and he’ll spend it.

That’s why the monopolistic media environment in this country is so dangerous. We have billionaire moguls who concentrate power and exploit it to advance their agenda. In Murdoch’s case, he will even use soft-core titillation and America’s pride to manipulate public opinion. And that’s why it is so important to Stop Big Media from gaining even more power courtesy of the FCC’s proposed new ownership rules.