Politics is a complicated pursuit that requires a well thought out game plan. An experienced professional knows that the path to victory cannot be left to chance. Mitt Romney seems to have done the meticulous research and deep analysis necessary to advance a serious campaign. While unorthodox, Romney has identified a constituent base amongst the nation’s wealthy and is working hard to solidify his dominance of it. 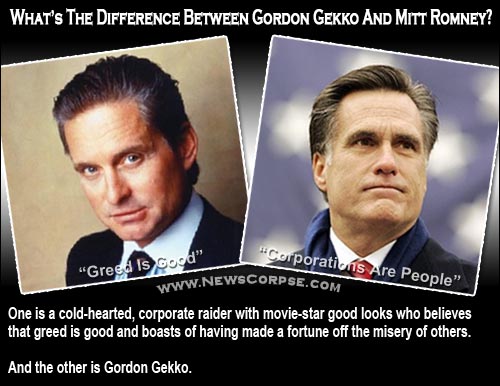 What else could explain his persistent pandering to the GOP (Greedy One Percent) and the corporations he thinks are people? Romney casually makes $10,000 bets. He likes to fire people, but isn’t concerned about the poor. He brags about owning numerous cars, including two Cadillacs. He is best known for having a net worth of a quarter of a billion dollars but only pays a 14% tax rate, about half of what average, middle class Americans pay.

The stream of statements that cast a spotlight on the differences between Romney and the rest of America cannot be accidental. After all, despite Romney’s insistence that he is essentially a businessman, he has spent the past decade in politics. He is aware of the presence and influence of media. And he knows quite well that he has a reputation for failing to connect with ordinary voters. Nevertheless, he continues to say things like what he said today at the NASCAR 500 in Daytona. When asked if he followed the sport he said…

“Not as closely as some of the most ardent fans. But I have some great friends that are NASCAR team owners.”

Of course he does. Why would anyone expect Romney to rub shoulders with the unclean peasants who sit in the stands when he can have cocktails with celebrities in the VIP section? Romney spent his morning in Daytona at breakfast with the billionaire owners of NASCAR. He toured the grounds, gave a short address to the crowd and cameras, and left without without ever intending to watch the race.

All of this leads to one inescapable conclusion: Romney is focused like a laser beam on locking up the vote of the richest Americans. It’s a bold strategy considering the composition of the voting blocs that control the wealth in this country. The 400 wealthiest Americans control about the same amount of wealth as the 150 million at the bottom of the income scale. It’s hard to see how that equation leads to a Romney victory, but he must know what he’s doing. Right?

As for his competition, Rick Santorum had a presence in Daytona as well. He didn’t make it personally, but he sponsored a car in the race. In a pre-race statement Santorum disclosed his strategy and his hopes:

“I recommended he stay back in the pack, you know, hang back there until the right time, and then bolt to the front when it really counts. So let’s watch. I’m hoping that for the first, you know, maybe 300, 400 miles, he’s sitting way, way back, letting all the other folks crash and burn, and then sneak up at the end and win this thing.”

What a lovely sentiment. Santorum is hoping that the other drivers “crash and burn.” That’s the way he hopes to achieve success – via a fiery holocaust of twisted metal and flesh. It’s probably a metaphor for the way he hopes to succeed in his campaign, and for the way he thinks people in all walks of life should advance their interests. Just pray for your opponents to meet some dreadful fate, then raise your arms victoriously. We already know that he hopes that there will always be income inequality in America and that he opposes expanding access to education for all citizens. So his new statement is consistent with his philosophy that hinges success on the failure of others.

There is an ironic symmetry between the positions of Romney and Santorum. One seeks to prop up winners, the other seeks to bash down losers. Neither cares much for the less fortunate among us who simply want a fair shot on a level playing field. They are two sides of the same coin and, if it weren’t for the horrible things they’ve said about each other, they’d make a pretty good GOP ticket.