Fox Nation is reporting the results of a new study that reveals some of the character differentials between the rich and the poor. As reported in the Huffington Post:

“The report contradicts the notion that poor people are more likely to act unethically out of financial necessity. Instead, the researchers wrote the ‘relative independence’ and ‘increased privacy’ of the wealthy make them more likely to act unethically. They also share ‘feelings of entitlement and inattention to the consequences of one’s actions on others’ that may play into their moral decisions.”

The study conducted experiments that showed that rich participants took twice as many candies as poorer participants from a jar that had been designated for children. The study also found that nearly half of all drivers of expensive cars cut off pedestrians at crosswalks, while no drivers of the cheapest cars did so (and only about 30% of drivers of less expensive cars). In addition, the study found that the rich were more likely to cheat in a game and lie to potential job applicants.

But the interesting part of the coverage by the Fox Nationalists is how they framed the study: LIB STUDY: Rich People More Likely to Take Candy from Children. 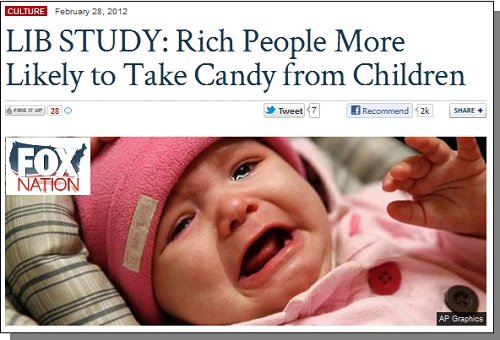 The “LIB STUDY” prefix was attached by Fox in an obvious attempt to disparage the research and to bias readers against it before they even read the article. So who is this liberal institution that is poisoning the minds of America with their phony studies that bash our nation’s patriotic millionaires? Well, it’s that bastion of secular-progressive propaganda, the National Academy of Sciences.

This is just more evidence of the right’s knee-jerk reaction to science, education and higher learning. They have an involuntary motor response that causes them to shake uncontrollably whenever learned people present documented research. It just cuts against the grain of the conservative mind that favors religious fables over science and faith over proof.

This study is only a part of the body of research on human behavior. It may or may not be conclusive of anything as there are likely to be other studies that either affirm or negate its results. That isn’t important here. What’s important is that, regardless of what you might think of this study, the representation by Fox that the National Academy of Sciences is just some liberal operation and therefore undeserving of consideration, further defines them as anti-science, pseudo-news hacks who champion illiteracy and ignorance.

4 thoughts on “Fox Nation vs. Reality: Taking Candy From Children”