The busy news fictionalizers at Fox Nation are hard at work this Saturday creating the stream of asinine idiotainment that their glassy-eyed readers demand. Here is an abridged selection of what Fox regards as newsworthy reporting today: 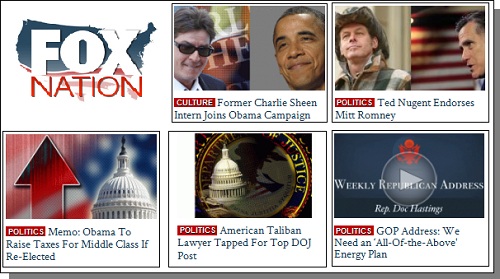 Starting off with a hard-hitting investigative news item, the Fox Nationalists uncover a juicy morsel about a new Obama campaign hire. Apparently this low-level social media promoter in a Wisconsin campaign office used to be employed by Charlie Sheen. That automatically makes him the subject of ridicule deserving of taunts from the Fox family of dimwits. No matter what you think of Sheen, his social media presence is impressive. He has 6.7 million followers on Twitter and 2.3 million people “LIKE” his page on Facebook. Anyone who contributed to that success could be a real asset for any political campaign.

On the other hand, in the world of unfortunate associations, Mitt Romney has picked up the endorsement of the incontinent Ted Nugent. It will be interesting to hear Romney defend Nugent’s assassination threats against President Obama, Hillary Clinton, and senators Feinstein and Boxer (if anyone in the media has the integrity to ask him).

Nugent: I was in Chicago last week I said, “Hey Obama, you might want to suck on one of these, you punk?” Obama, he’s a piece of shit and I told him to suck on one of my machine guns. Let’s hear it for them. I was in New York and I said, “Hey Hillary, you might want to ride one of these into the sunset you worthless bitch.” Since I’m in California, I’m gonna find Barbara Boxer she might wanna suck on my machine guns. Hey, Dianne Feinstein, ride one of these you worthless whore.

Fox Nation continued its quest for journalistic malpractice with a story it headlined: Memo: Obama To Raise Taxes For Middle Class If Re-Elected. The source to which Fox linked was an article at a web site called WeaselZippers. That should be the first sign of its credibility. The truth behind the data that Fox is deliberately misconstruing is related to the tax cuts for the wealthy that Bush pushed through more than a decade ago with a sunset provision that has already passed. It was Bush who predetermined that taxes would go back up. Obama has repeatedly tried to cut a deal where only the tax cuts for the rich would expire, but the GOP has fought him every step of the way.

The next story is one that tries to imply that Obama’s Department of Justice is aligning itself with Taliban terrorists. Just how stupid do they think their readers are? (Don’t answer that). The real story is that an attorney who has been working for the DOJ for three years has been promoted as a result of his exemplary performance. In his role as the head of the Justice Department’s Civil Division, Tony West “recovered more than $8.8 billion in taxpayer money, the highest three-year total in department history.” One of the many things that the right-wingnuts never understand about the Constitution is that every defendant is entitled to representation. It is the foundation of our justice system. And trying to smear an attorney for carrying out his constitutional obligations is reprehensible.

Finally, the Fox Nationalists were kind enough to post a link to the GOP response to Obama’s weekly address. But astute observers will note that they never posted a link to the address that the GOP were responding to. You know, the one Obama delivered. It’s like posting the answer to a question without ever posting the question. Fox is valiantly protecting its readers from any exposure to information that would give them a full and complete understanding of current events. That explains why they are so pitifully ignorant. Thank Fox’s dedication to fairness and balance for that. Here, by the way, is the Obama video: