Sometimes, in the right-wing noise machine, you really need to stretch to spread your smears across as many targets as possible. It calls for a strategy that aims to cast your juvenile insults so broadly that they ensnare any of your perceived enemies within a certain proximity. In a way, it’s a conservative approach that allows you to use less tar to tarnish more opponents in one wide swipe.

To that end, the Fox Nationalists went after Matt Taibbi of the Rolling Stone for his remembrances of Andrew Breitbart. Taibbi took a particularly Breitbartian tone in saying…

“So Andrew Breitbart is dead. Here’s what I have to say to that, and I’m sure Breitbart himself would have respected this reaction: Good! Fuck him. I couldn’t be happier that he’s dead.

I say this in the nicest possible way. I actually kind of liked Andrew Breitbart. Not in the sense that I would ever have wanted to hang out with him, or even be caught within a hundred yards of him without a Haz-Mat suit on, but I respected the shamelessness. Breitbart didn’t do anything by halves, and even his most ardent detractors had to admit that he had a highly developed, if not always funny, sense of humor.”

That’s the sort of hyperbolic, attention-seeking comment that epitomized Breitbart’s existence. And that is exactly the point that Taibbi was making. It was a fitting tribute, not just to the man, but to his inner being and what he stood for; what he was most proud of. Breitbart defiantly rejected calls for civility, and when he was challenged to apologize for outrageous statements, he famously responded by barking back, “Apologize for what!” So how did Fox Nation report this news? 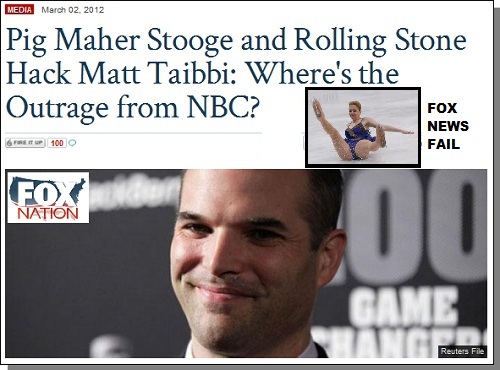 Presumably the Fox Nationalists don’t think that Matt Taibbi is well enough known to carry a hit piece on his own. So they dressed it up with one of their favorite, and most childish insults – to refer to comedian Bill Maher as “Pig” Maher. But some pimply-faced editor still didn’t think that was enough, so they added a reference to the evil home of Donald Trump’s The Apprentice, NBC. Neither Maher nor NBC had anything to do with this story. Even the source article to which Fox Nation linked, from the uber-conservative NewsBusters, made no mention of these innocent bystanders. In fact the NewsBusters, while still incensed by Taibbi’s language, acknowledged a certain appropriateness. In their opening paragraph they say…

“I almost hate to draw attention to this incredibly sad example of the intolerant left over at Rolling Stone, but quite frankly, Andrew Breitbart probably would have eaten this up, and tweeted it back out.”

That’s absolutely true. Breitbart even tweeted back out a criticism of him that I sent just last week:

The photo of @AndrewBreitbart nobody wants to see: goo.gl/fb/49dy9 Why should I be the only one to suffer? #p2 twitter.com/NewsCorpse/sta…

As I, and many others have noted, Breitbart would have been the first to proudly speak ill of the dead. On the day that Sen. Ted Kennedy died. Breitbart tweeted “Rest in Chappaquiddick.” He followed that up with several other disgraceful remarks that, unlike Taibbi, he could not frame as being tributes to the decedent.

Which brings us back to Fox Nation’s utterly unrelated assaults in their story’s headline. The inclusion of Maher and NBC was wholly the idea of Fox, and it really demonstrates how embarrassingly infantile the Fox Nationalists are. It’s bad enough that Fox is a netowrk that has no regard for the truth, but do they also have to embrace such brazenly immature rhetoric while they are lying?