For the past year or so, Fox News has been mercilessly bashing Chevrolet’s new electric vehicle, the Volt. They have derided it as an unsafe, unpopular, taxpayer-funded boondoggle, that was foisted on the auto industry and the public by President Obama as part of his socialist agenda.

This well-coordinate media assault encompassed conservative television, radio, newspapers, and Internet, and was an unprecedented effort aimed squarely at an American made product. They disparaged the company, the car, and the American workers who produced it. This vilification of the Volt has been most prominently featured on Fox News properties, where it has been the subject of withering criticism, despite the fact that it is also the North American Car of the Year and the European Car of the Year for 2011, the first time a car has won both honors.

This makes this morning’s segment on Fox & Friends, with media consultant Lee Spieckerman, all the more curious. Host Steve Doocy introduced his guest for a segment titled “Can the Chevy Volt Help Win the War on Terror?” by saying that, “It’s a great car that’s gotten a bad rap, all because of President Obama’s record, perhaps.” 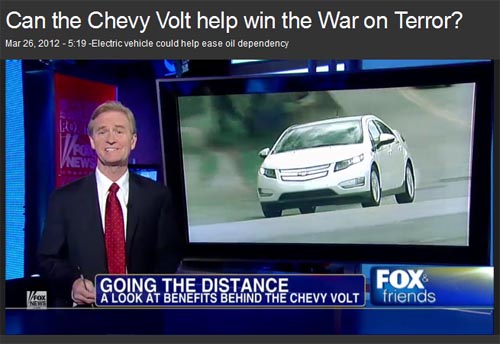 For Doocy to suggest that the Volt has gotten a bad rap because of Obama’s record is absurd. It has gotten a bad rap because people like Doocy, and his comrades at Fox, have endeavored to malign the car because President Obama has expressed support for it. It has less to do with Obama’s record than with the Obama Derangement Syndrome that results in right-wingers hating anything that Obama likes. If Doocy wonders where the hostility toward the Volt comes from, he might trying looking at the Fox Nation web site, whose recent headlines illustrate just how committed they are to trashing the Volt and tying it to Obama:

Hmm. I wonder how the Chevy Volt got such a bad rap.

Nevertheless, this morning Doocy’s tone had changed. He spent the entirety of the segment agreeing with his guest who sought to dispel the myths associated with the Volt. Spieckerman’s enthusiasm sounded like it could have come from an ardent environmentalist, which is why he had to keep qualifying his comments with affirmations of his conservative credentials.

Spieckerman: You know, I’m a Texan. I’m a “drill baby drill” guy. And, unfortunately, I love Fox News and I feel like I’m kind of attacking my own family because I love O’Reilly, I love Neil Cavuto, I love Eric Bolling, but like a lot of my fellow conservatives, they seem to have kind of a fetish for demonizing the Volt. And they’re perpetuating this myth that the Volt was some kind of Obama administration green energy fantasy that was forced on General Motors during the bailout. It had been in development two years before Obama was elected. It had been championed by one of the greatest car executives in American history, Bob Lutz, who is a conservative and a climate change skeptic. So it’s a myth. You know the tax break for buying the Volt was implemented by the Bush administration. That was not something that occurred under the Obama administration.

Spieckerman described the Volt as “an anti-terrorist weapon” because of its potential to reduce our dependence on foreign oil. He pointed out that in ten years we could be saving almost 700 billion barrels of oil a year. He called it the iPhone of the automobile industry. And all the while Doocy was grinning and nodding and even called the Volt “a cool vehicle.”

Something obviously occurred to shift the direction of Fox’s perspective on the Volt. It is a 180 degree turnaround that was sprung without explanation or any acknowledgement of their previous position (“We have always been in love with the Volt.” ~ Paraphrasing Orwell). Perhaps they recognized that bashing American workers was not a particularly good idea in an election year. Perhaps they were worried about whether it might impact GM’s advertising expenditures on Fox. Or maybe it was just an anomaly and they will return to assailing the car and its builders tomorrow.

There is one thing for which we can be certain, if they continue with their new found admiration for the Volt, they will soon be publishing stories about how Obama never liked it and has been working to kill it ever since he came into office. For Fox News, Orwell’s 1984 was not cautionary fiction – it was a handbook.

3 thoughts on “Fox News Asks: Can the Chevy Volt Help Win the War on Terror?”