Rupert Murdoch’s regime is coordinating closely to disseminate false allegations from an author that even conservatives regard as disreputable.

Edward Klein just released a book that alleges that Bill Clinton called Obama an amateur and tried to persuade Hillary to resign as Secretary of State and run against him in the 2012 primary. However, Klein is a sordid character whose work has been repudiated by fellow journalists. He has even been denounced by right-wing pundits like Byron York, and Fox’s own Greta Van Susteren. But that hasn’t stopped Murdoch’s Machine from blanketing his “news” assets with new accusations from Klein: 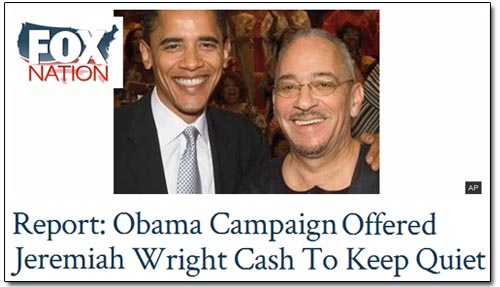 The headline on Fox Nation, “Report: Obama Campaign Offered Jeremiah Wright Cash To Keep Quiet,” is sourced to Klein’s latest book of lies. Note that the allegation against the Obama campaign was not an accurate representation from Klein’s book where a go-between was cited as having made the alleged bribe. Fingering the Obama campaign was Fox Nation’s idea and, recognizing their own dishonesty, they later changed the false headline to say “Report: Obama Ally Offered Jeremiah Wright Cash To Keep Quiet.” It’s still false but maybe one degree less so. [Update: Fox Nation changed the headline yet again, this time to make it sound more scandalous: Obama Team Tried to ‘Bribe’ Rev. Wright: Book]

This same story was pumped out by Murdoch’s Fox News and New York Post. Clearly there is a coordinated effort to push this fakery and to reenergize the ancient Rev. Wright controversies. That suggests a fair measure of desperation on the part of Murdoch and his rightist cohorts who feel it’s necessary to rerun already debunked smears from a four year old campaign. And they didn’t work back then either.

Klein’s past excursions into Fantasyland have included assertions that Hillary Clinton is a lesbian; that Bill raped her; and that old stand-by, Obama is a Muslim from Kenya.

ThinkProgress has a more detailed bio of Klein and his past record of disinformation and deliberate dishonesty. Suffice to say that he is a weaver of tall tales that have no basis in reality. Which makes him a perfect source for Fox News and a desirable guest for Fox’s Lou Dobbs, where Klein is scheduled to appear next week.

It’s funny, in a despicable way, that the conservative media is hyping nonsense like this, while simultaneously accusing the President of not wanting to run on his record. The truth is that Obama has been highlighting his record at every public appearance, while the GOP harps on ancient irrelevancies. Did I mention that they were desperate?