During the long and bitter recall campaign against Wisconsin governor Scott Walker, the Republicans insisted that their sole purpose was to cut wasteful spending and bring down government deficits. Most of the working families of Wisconsin knew that wasn’t true. Walker’s agenda was aimed squarely at collective bargaining rights that had been won over decades of hard fought negotiations. The result was a better quality of life for workers in the state, both in and out of unions.

In the past week, however, the veil has been lifted, and the anti-worker conservative’s motives are now being expressed openly and without the deceptive pretenses that characterized the pro-Walker campaign. 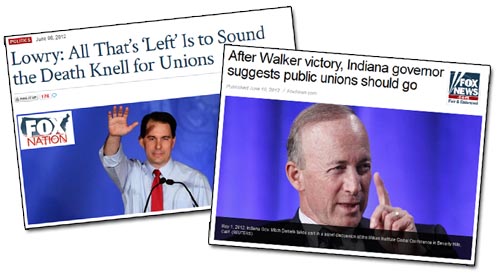 Immediately following the election results, the National Review’s Rich Lowry published an article with the provocative title, “All That’s ‘Left’ Is to Sound the Death Knell for Unions.” Lowry gleefully wrote of the defeat of the recall, disparagingly portraying the 1.16 million pro-recall voters as “hippie leftovers and lefty college students.” But the unadulterated focus of the article was on his notion that public sector unions were on the decline and should be abolished.

Today on Fox News Sunday, that sentiment was affirmed by Indiana mayor (and prospective Romney running mate) Mitch Daniels, who said that “I think, really, government works better without them.” That’s a little like having the CEO of General Motors express his preference for not having to deal with auto worker’s unions. Of course not. They would both prefer to be able to exploit workers and deny them reasonable benefits and working conditions without the interference of worker’s advocates.

The fact that the right is now openly declaring their intention to abolish unions indicates the confidence with which they believe they can pursue that goal. They have always wanted to go back to the days when corporations could set the rules and employees had to take it or leave it. But after the success of the movement for worker’s rights and union representation they pretended to moderate their stance and accommodate the unions. Now that facade has apparently been demolished and management factions of business and government are re-mobilizing to roll back the gains won through prior negotiations.

Lowry and Daniels, and the right-wing media that support them, had better be careful. The results of the recall in Wisconsin were not an affirmation of some general opposition to unions. And with 1.16 million voters supporting the recall (vs. 1.33 million for Walker), there is still abundant support for the rights of workers. And there is no evidence that anti-recall voters were anti-union.

Not discussed much since the election is the fact that the recall of another Republican state senator was successful, which flips the majority control of the senate to the Democrats. So clearly the hooting on behalf of giddy Republicans is premature. They are not as popular as they think they are. And now, Walker’s regressive policies will not be rubber-stamped by a GOP legislature.

But Democrats must not be complacent. The right has overtly declared war on unions. It is no longer a secret agenda hidden behind a disingenuously expressed sympathy for workers. It is out in the open and it must be countered effectively and vigorously. They have thrown down the gauntlet and it is up to the left to step up and challenge them. This is a battle we can win because, while they may have millions of dollars from vested special interests, we have the people on our side.

6 thoughts on “The Real Post-Wisconsin Right-Wing Agenda: Kill The Unions”