Back in March, Bill O’Reilly had a contentious debate with Caroline Fredrickson, the president of the American Constitution Society, on the potential outcome of the Supreme Court’s hearing on ObamaCare. Ms. Fredrickson presciently predicted that the bill would be upheld as constitutional and even noted specifically that the justification would come from the Constitution’s taxing authority. However, O’Reilly disagreed and concluded the segment by saying this:

Last week, following the Court’s decision, O’Reilly was on vacation, but he did call into his program and spoke with guest host Laura Ingraham. He said nothing about himself having been so desperately wrong. Today he returned and brought up the the incident in March, however, he did not apologize. Just prior to a disingenuous pseudo-apology, he declared that he is “not really sorry,” which cancels out anything he said afterwards. You don’t get credit for an apology if you precede it by saying that you’re not really sorry.

Rather, O’Reilly spent several minutes blaming CNN’s Howard Kurtz and Media Matters for – well, I couldn’t really figure what he was blaming them for. Apparently they were somehow responsible for his being a complete moron, and therefore he had nothing for which to apologize. He alleged that Kurtz was empowering Media Matters in some respect, and that…

“Kurtz does the bidding of Media Matters, and, I don’t know, maybe I should just ignore that and, as you say, move along down the highway, but it certainly disturbs me a little bit.”

And that was it. No actual apology. No admission that he was an idiot. No integrity in keeping his word. Just an obvious and pathetic dodge. He pointed fingers at others who had nothing to do with any of this and pretended that he never made a spectacularly stupid promise in support of his ill-informed prediction. It was a display of dishonesty and cowardice that befits someone like – well, like Bill O’Reilly. So I thought I’d help Billo out by saying what he is to chickenshit to say: 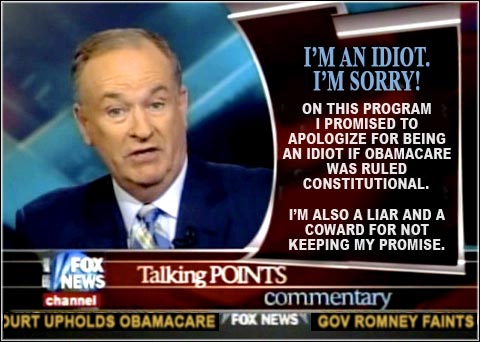 I think that about covers it.