The Supreme Court today upheld the Affordable Care Act (aka Obamacare) today and there will be abundant coverage of this historic decision for the remainder of the day, of the week, and of this election year. Partisans from across the political spectrum will be parsing the decision for ways to portray it as either a victory or an incentive to motivate their followers.

But there is something that occurred in the months preceding this decision that deserves renewed attention. On March 26, 2012, Bill O’Reilly debated the healthcare act with Caroline Fredrickson, President of the American Constitution Society. After a tumultuous exchange that mainly exhibited O’Reilly’s arrogantly thuggish personality (transcript below), O’Reilly concluded by saying this: 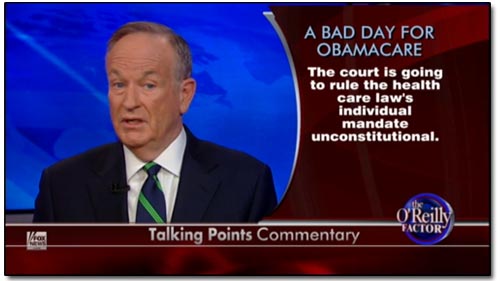 Will O’Reilly keep that promise? Although there are incidents far too numerous to mention wherein O’Reilly proves that he’s an idiot, there are few times that he’s committed to admitting it himself. In addition to his debate with Fredrickson, O’Reilly also did a Talking Points Memo segment asserting with absolute certainty that the mandate would be ruled unconstitutional. He should not be allowed to forget his mistakes and his promises. Email him here to ask him to keep his word.

On a side note: After the long awaited decision was announced, Fox News cut away from their coverage to air an interview of News Corp CEO Rupert Murdoch by his sycophantic lackey, Neil Cavuto. There was nothing particularly newsworthy disclosed in the segment. It appeared to be simply a distraction from the Supreme Court’s far more consequential news. That will likely be the tactical approach that Fox takes for the remainder of the day. They will attempt to downplay an event that they previously trumpeted as the most important Supreme Court decision in decades. They will dodge and weave and misconstrue as they plaster the air with dissenting views from Republican politicians and pundits. The headline, for the time being, will be “Obama’s health care tax increase survives.” And as soon as the House vote on holding Attorney General Eric Holder in contempt of congress occurs, that will become the headline.

Here is the transcript of the O’Reilly Factor interview with Caroline Frederickson. Note how precisely she predicted the Court’s decision that the act would be upheld under the taxing authority of the Congress. Note also O’Reilly’s brutish incivility as he threatens to cut off the interview if she didn’t comply with his demands to answer questions the way he wanted her to.

O’REILLY: Name one thing, one thing that the federal government forces you to buy. One.

FREDRICKSON: No, no. I want to correct you.

O’REILLY: Look, my — my opinion is my opinion. Your opinion is yours. I don’t want to be corrected. Ms. Frederickson please answer the simple question. We don’t have all night.

FREDRICKSON: The legislation — you have to let me answer.

FREDRICKSON: The legislation does not require people to buy health insurance.

O’REILLY: Of course it does.

FREDRICKSON: It imposes a penalty for those who don’t.

O’REILLY: You want to play the semantic game?

FREDRICKSON: Forces people to buy in the form of a tax.

FREDRICKSON: Tax power. And it’s designed completely within the rational scope of the legislation —

O’REILLY: No. Ms. Frederickson. This is not —

O’REILLY: This is becoming absurd. It’s police power if you punish someone for not doing anything. Sounds absurd.

FREDRICKSON: Now, you’ve got to let me talk if you’re going to invite me on your show.

O’REILLY: Name one thing the federal government compels you to buy. One thing.

FREDRICKSON: Well, let me say that under the Militia Act of 1792, people were compelled to buy muskets and powder.

O’REILLY: What act was that?

FREDRICKSON: This doesn’t require — The Militia Act. This doesn’t actually require people to buy health insurance. And I think it would be good if you read the legislation.

O’REILLY: I did read the legislation.

FREDRICKSON: It imposes a penalty. And a penalty is different from – –

O’REILLY: That’s compelling something to do something if you’re going to punish them for not doing it.

FREDRICKSON: No. It’s a tax. Essentially, people have to pay a very modest amount — it’s about $95 a year — if they choose not to buy health insurance.

But it’s part of a scheme in which Congress rationally chose to build a national market for health insurance and cover the uninsured.

And if I’m wrong I will come on, and I will play — I will play your clip. And I will apologize for being an idiot. But I think you’re desperately wrong.

FREDRICKSON: All right. Well, I look forward to it.

She was right, Billo. What say you?

{Update] This evening on the O’Reilly Factor, Laura Ingraham was in at the anchor desk because Bill O’Reilly was on vacation. Well, that would have been the perfect dodge for O’Reilly to avoid keeping his word and hoping that by Monday everybody would have forgotten.

However, Ingraham immediately announced that O’Reilly was on the phone from North Carolina to comment on this momentous news event. He spent ten minutes of his precious vacation time bashing the decision, the President and, on another subject, Attorney General Eric Holder. But he never mentioned that he is an idiot. Somehow, the fact that he is an idiot slipped his idiotic mind. I’m shocked!

4 thoughts on “Obamacare Upheld: Will Bill O’Reilly Keep His Promise To Apologize For Being An Idiot?”