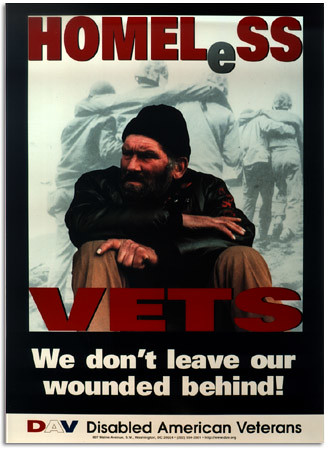 In his speech thanking supporters for a second place finish in Iowa, John Edwards raised a sensitive subject that is rarely discussed in contemporary politics.

“…tonight, 200,000 men and women who wore our uniform proudly and served this country courageously as veterans will go to sleep under bridges and on grates. We’re better than this.”

“As for John Edwards…good grief… this guy as no clue […] The only thing sleeping under a bridge is that guy’s brain.”

What a callous dismissal of the plight of citizens who deserve something more for their sacrifices. Homelessness amongst veterans is not an emerging crisis that might have caught O’Reilly by surprise. It is an enduring and heartbreaking reality that is well documented. The National Coalition for Homeless Veterans was founded 18 years ago to seek solutions and promote awareness of the problem. The National Alliance to End Homelessness released a study last year on Ending Homelessness Among Veterans. Among their findings:

But O’Reilly, not content to be merely an ignorant and insensitive jerk, he expands on his dearth of compassion a week later by sarcastically designating himself as a lifeline for troubled vets, saying:

“They may be out there, but there are not many of them out there, OK. So if you know where there is a veteran sleeping under a bridge, you call me immediately, and we will make sure that man does not do it.”

I imagine that O’Reilly would respond to the situation exactly as he says. He would send Stuttering Jesse Watters, or some other Fox Security goons, to forcefully remove any recalcitrant bridge squatters from the area, making sure that nobody blocked the shot of his ambush camera crew.

I say we call him on his offer and direct as many homeless vets as we can to The Fester and to Fox News and see what they do. I expect they will find the problem a bit more complex than presumed by their small-minded preconceptions. While O’Reilly doesn’t believe the problem exists, to the extent that it might, he believes he can resolve it by himself. I would like nothing better than to see this problem show up on his doorstep and watch him squirm.

This is the same guy who fashions himself an advocate for children and writes books on the subject, but claims that kidnap victims prefer life with their captors rather than with their parents. This the same guy who complains that not enough celebrities visit the troops in war zones, even though many have gone multiple times to entertain them. O’Reilly only seems to go when he has a new book to promote.

This is a man who says that John Edwards is a phony and who disputes the all too sad reality that many veterans and their families are struggling through. Yet he also seeks to fortify his dimwitted position by saying that…

“My determination is based upon what is real and what is hype. I believe John Edwards is hype.”

This is a man who raises hypocrisy to a new level. Let’s show him what is real and what is hype. There are thousands of pictures of homeless vets online – Flickr, Google Images, etc. Find one and send it to O’Reilly with a request that he make good on his pledge.

“And the fact that this talk show host, Bill O’Reilly, is willing to speak out that blatantly, when he has no idea what he’s talking about, is an example of how America doesn’t understand the problem, doesn’t understand how serious this issue is.”