Here we go again, people. If you thought the birther conspiracy was over, or at least confined to the dementia-addled fanatics at WorldNetDaily, you will be sorry to hear that Fox News is continuing to flail this rotting corpse of a long-expired horse. 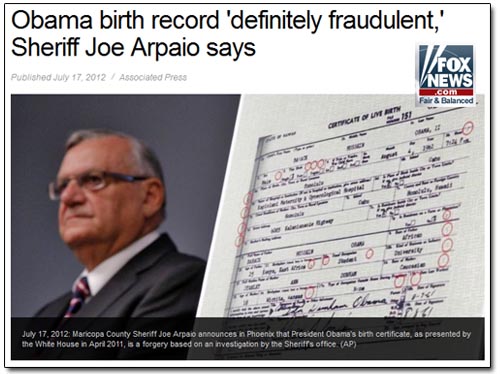 The ground-breaking new information apparently consists of the testimony of a 95 year old former clerk at the Hawaiian registrar’s office who claims to have deciphered secret codes embedded into the certificate. Neither the clerk, nor her allegedly recorded conversation, nor any documentation of the code was revealed at Arpaio’s press conference. However, the Hawaii Attorney General’s Office issued a statement affirming that the certificate is valid. Of course the registrar’s office, the hospital, doctors at the hospital, local newspapers, and family friends, have all said the same thing. Nevertheless, holdouts like Arpaio and Donald Trump continue to have faith in their delusions.

Arpaio may have an ulterior motive in releasing this phantom evidence at this time. Later this week he will be in court defending himself against allegations that his department engaged in rampant racial profiling of Latinos. This is just the latest stain on Arpaio’s record. He is also being investigated by federal authorities for having neglected hundreds of sexual abuse cases while he has been otherwise occupied with his birther obsession.

The fact that this story appears prominently on the Fox News web site, however, is evidence of something significant. It proves how devoted Fox News is to slandering the President and to helping Mitt Romney to change the subject from his business and personal corruption. Even Fox Nation hasn’t posted an article on this (yet). No doubt this non-event will likely pass into the ether in a matter of hours. Arpaio has neither evidence nor credibility. But Fox’s participation in promoting such obvious silliness should not be so quickly dismissed.