The Fox Nationalists have demonstrated their aversion to the truth on so many occasions it’s hard to keep an accurate count. Now, in response to an new ad by Massachusetts senate candidate Elizabeth Warren, they have not only lied, but exposed their latent unpatriotic tendencies as well. 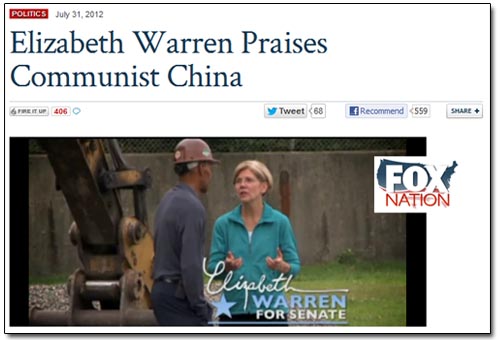 To state bluntly that “Elizabeth Warren Praises Communist China” is a thoroughly manufactured falsehood. She never did anything remotely of the kind. What she did was advocate for the importance of America remaining competitive on an international basis and not permit China to take the lead. Here is what she said:

“We’ve got bridges and roads in need of repair, and thousands of people in need of work. Why aren’t we rebuilding America? Our competitors are putting people to work, building the future. China invests 9 percent of its GDP in infrastructure. America, we’re at just 2.4 percent. We can do better. We can build a foundation for a strong new economy and get people in Massachusetts to work right now.”

The Fox Nationalists have a decidedly shallow grasp of world affairs. They think that lamenting America falling behind on matters critical to international competitiveness is the same as praising a political system of government. Were these same conservatives outraged when Reagan, and other cold warriors, argued that the U.S. was falling behind the Soviet Union militarily and, therefore, they were praising Russia’s communism? And more recently, did they hammer Newt Gingrich as a commie-symp when he said last January that “You cannot compete with China in the long run if you have an inferior infrastructure.”

For Fox News, and its conservative benefactors, to criticize Warren for these comments is akin to advocating for America to succumb to foreign competitors. A better headline for Fox’s article might have been: “We’re #2. Conservatives Celebrate the U.S. Coming in Second to China on Infrastructure Development.” In effect, it’s conservatives who are acceding to China’s superiority – not the other way around.