Dow Jones announced today that it will be adjusting the components of its Dow 30 stock index. This is the first change since Dow Jones, parent of the Wall Street Journal, was purchased by Rupert Murdoch’s News Corporation, parent of Fox News and the recently launched Fox Business Network. The index will be replacing the Altria Group and Honeywell with Bank of America and Chevron. The result will be an increase in the weighting of financials and energy in the index.

It will be interesting to see the effect over time of these trades, but given the propensity of Murdoch to attempt to manipulate outcomes to his liking, one must wonder if there is a hidden purpose to these events. He has previously confessed to trying to shape the agenda on the war in Iraq. He also promised to make the FBN a business friendly network.

Murdoch’s machinations of late have not met with the success to which he is normally accustomed. Fox News is presently the slowest growing cable news network. FBN got off to a pathetic crawl. And I wonder if anyone else has noticed this sign of the Apocalypse: When the Fox Business Network launched on October 15, 2007, the Dow Jones had just hit its all-time high. Since then the markets have collapsed, diving 15% in the four months since FBN’s debut. 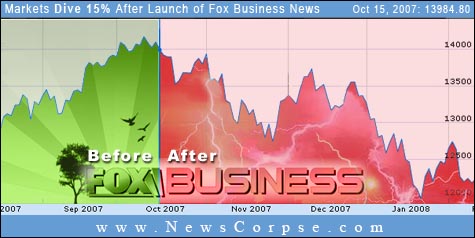