With Mitt Romney’s campaign flailing desperately to avoid a massive blowout next month, the conservative media that is frantically trying to prop him up are running out options. They’ve tried to turn the unrest in Libya into Obama’s Watergate. They’ve tried to transform out-of-context snippets of Obama’s speeches into scandalous gaffes. They’ve tried to dismiss all of the polls showing Obama ahead as products of a liberally biased media. None of that has worked to reverse the decline of Romney’s electoral prospects.

So what is a determined right-wing press to do when all of their best efforts to torpedo President Obama have crashed in flames?

Resort to racism, of course. Led by the Daily Caller and the Drudge Report, and buttressed by Fox News, the right is now hyperventilating over a five year old video of Obama talking about the well-documented failure to adequately respond to the devastation caused by Hurricane Katrina in New Orleans. They think that people have forgotten about George Bush’s deadly neglect and his praise for FEMA crony Michael “Heckuva Job” Brown.

Contrary to claims that this is a shocking new video, Obama’s speech was covered at the time by most of the press, including Fox News. Even the Daily Caller’s publisher, Tucker Carlson, reported on this video when he anchored a program on MSNBC. The feverish presentation of this video is nothing more than a transparent attempt to manufacture controversy where none exists.

However, there is another objective here on the part of these video-hypers. Since the content of the video contains references to race, they see this as an opportunity to portray the President as obsessed with the issue. Much of the discussion in the rightist media is about whether Obama was blaming racism for the poor response to Katrina (as if that would be shocking). They are also focusing on a portion of the tape where Obama acknowledges his former pastor Rev. Jeremiah Wright, who was in the audience. Glomming on to Wright is not an accidental brush with the past. Conservatives have been prodding Romney to adopt that as an issue since at least last May when I compiled these quotes:

Fox Anchor Chris Wallace: As far as Rev. Wright is concerned, I think it had a lot of relevance, and I think McCain was crazy not to bring it up.

Radio Talker Mark Levin: Why would you take any issue off the table, particularly issues that give us a look into this man’s character?

Fox Anchor Sean Hannity: I believe that the president’s relationship with the Reverend Jeremiah Wright, a man that influenced him for over 20 years, inspired him, is a very important campaign issue.

Fox Host Kimberly Guilfoyle: I don’t think [rejecting the Wright issue] is the right thing to do. I think he should try to get after it.

Powerline’s Paul Mirengoff: I think there may be value in talking about the Obama-Wright connection.

Fox Contributor Charles Krauthammer: [I]n principle, if you want to [bring up Wright], it would be completely legitimate.

Herman Cain: I think it is fair if someone wants to highlight the Reverend Jeremiah Wright and his relationship with Barack Obama because, quite frankly, it wasn’t highlighted enough in 2008 when he was running for president the first time.

So now, via a coordinated effort between Romney’s camp, Drudge, and Fox, this issue is being revived. Is it because the public has been clamoring for more information about it? Unlikely. Is it because it worked so well the first time? McCain lost. Or is it because it injects the theme of race into the campaign and riles up the GOP base and spurs prejudiced wingnuts to show up at the polls? Let’s just say “Fox News Reports, You Decide.” 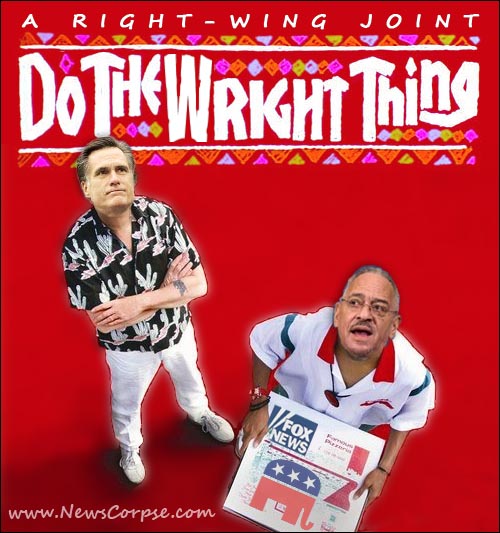 [Late Breaking] Fox Nation is piling on with yet another “Unearthed Video” that charges Obama with “Slam[ing] ‘Violent’ Rich People.” In fact, in this 10 year old clip Obama was talking about the figurative violence of neglecting the needs of America’s less fortunate citizens. Fox is portraying these comments as literal and implying an escalation of the class war. On that subject, remember the words of Warren Buffet: There is a class war, and we are winning. Here is what Obama actually said: 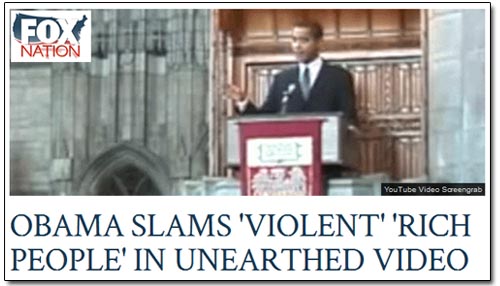 “The philosophy of nonviolence only makes sense if the powerful can be made to recognize themselves in the powerless. It only makes sense if the powerless can be made to recognize themselves in the powerful. You know, the principle of empathy gives broader meaning, by the way, to Dr. King’s philosophy of nonviolence. I don’t know if you’ve noticed, but rich people are all for nonviolence. Why wouldn’t they be? They’ve got what they want. They want to make sure people don’t take their stuff. But the principle of empathy recognizes that there are more subtle forms of violence to which we are answerable. The spirit of empathy condemns not only the use of firehoses and attack dogs to keep people down but also accountants and tax loopholes to keep people down. I’m not saying that what Enron executives did to their employees is the moral equivalent of what Bull Connor did to black folks, but I’ll tell you what, the employees at Enron feel violated. When a company town sees its plant closing because some distant executives made some decision despite the wage concessions, despite the tax breaks, and they see their entire economy collapsing, they feel violence.“

Once again, there is nothing objectionable in those remarks. But Fox finds a way to mischaracterize them in order to stir racial animus. It’s all they have left.

10 thoughts on “Conservative Media Hype Old Obama Video: When All Else Fails, Resort To Racism”