The attack on the U.S. embassy in Libya was a tragic event that took the lives of four Americans serving their country. But rather than reporting what occurred with dignity and respect, Fox News immediately sought to politicize the tragedy in an effort to damage President Obama during a heated campaign. Unfortunately, their zeal to create a phony election issue has also harmed the families of the victims and the search for the truth.

In the wake of the attack there was rampant speculation as to the cause and the participants. Right-wing pundits and politicians didn’t wait for any facts before declaring their conclusions that it was premeditated terrorism. The Obama administration took a more thoughtful and responsible approach by not making any definitive statements. Conservatives portrayed that as weakness and continued to muddy the waters with baseless yammering.

As usual, Fox News took the lead in propagating rumors and innuendo. Their Fox Nation web site has published a steady stream of one-sided criticisms of the Obama administration. Amongst the wildly unfounded accusations are charges of deliberate cover-ups complete with comparisons to Watergate. Thus was born Benghazi-Gate. 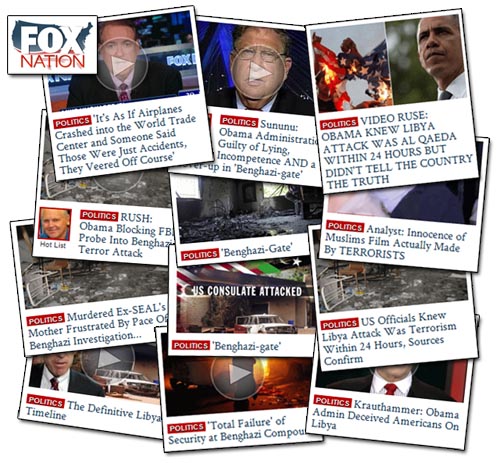 Ever since the mid-1970’s scandal that drove Richard Nixon from office, partisans have been attempting to slap a “gate” at the end of any controversy. But it should be remembered that Watergate was not simply some government gaffe. It was an intentionally criminal act that included breaking into Democratic headquarters, paying off accomplices for their silence, and lying to investigators from law enforcement and congress. All of that unlawfulness was in pursuit of personal political benefits to the Nixon White House and reelection effort.

What occurred in Libya was tragic, but it was certainly not the result of someone in the White House pursuing personal gain. Nor was there any hint of corruption or clandestine plots to sabotage a political foe. Nor were there any attempts to covertly mask unlawful activity. In other words, there is nothing in this story that remotely resembles Watergate. This is just an attempt on the part of Fox to throw more mud at the President and hope that some of it sticks. It is their contribution to the Romney campaign that has been so woefully inept.

It has been less than three weeks since the Libyan embassy attack. That is hardly enough time to have conducted a thorough investigation and arrive at a conclusive decision. It doesn’t help matters with bitter partisans screaming for the heads of government agencies and even the impeachment of the President. In fact, that’s the kind of background noise that actually inhibits the process and unnecessarily incites further hostilities. Imagine the glee with which Al Qaeda would greet the news that their violent protests led to the downfall of the American president who ordered the killing of their leader. That is who the Republicans are aligning themselves with in this attempt to oust Obama from office.

12 thoughts on “BENGHAZI-GATE: How Fox News Is Shamelessly Politicizing Terror In Libya”