The GOP’s candidate of the of the one-percent, Mitt Romney, has built his campaign around a unique strategy: Take everything President Obama says out of context and then try to use it against him. This is a tactic that he has been employing repeatedly in lieu of actually telling voters what he would do were he elected.

The latest example is his feverishly grasping a snippet of something Obama said at the Univision forum yesterday. Here is what the President said:

“I think that I’ve learned some lessons over the last four years, and the most important lesson I’ve learned is that you can’t change Washington from the inside. You can only change it from the outside. That’s how I got elected, and that’s how the big accomplishments like health care got done, was because we mobilized the American people to speak out. That’s how we were able to cut taxes for middle-class families.

So something that I’d really like to concentrate on in my second term is being in a much more constant conversation with the American people so that they can put pressure on Congress to help move some of these issues forward.”

That’s a pretty uncontroversial expression of respect for the American people and including them in the process of reforming government. And it’s something that Obama said since the beginning of his work in national politics. It is, in fact, what “Hope and Change” was all about when he told supporters that “you are the change.”

Mitt Romney latched onto just seven words from the hour-long event and is attempting to attach a meaning to them that bears no resemblance to their actual intent. Those words are “You can’t change Washington from the inside.” Romney has added that phrase to his stump speech along with his promise to affect change ONLY from the inside. That’s not surprising since he has already written off half of the American people as those who “it’s not my job to worry about.” It’s also not surprising that Romney is again exposing his raving hypocrisy, because he has previously said the very same thing about how to change Washington: 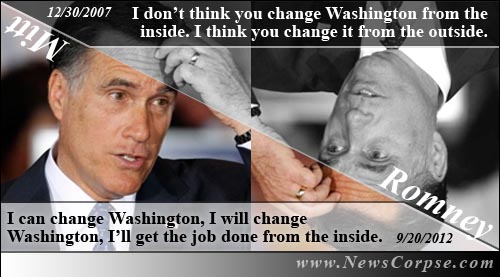 Let’s recap some of the other out-of-context moments that have become integral parts of the Romney campaign:

“You didn’t build that.” This is a deliberate misquoting of Obama who was actually referring to roads and bridges, not the private businesses that Romney has tried to imply were the subject of the remarks.

“We tried our plan and it worked.” Here Romney deliberately asserted that Obama was referencing his own record and implying that it had achieved complete success. In fact, Obama has consistently said that more needs to be done and this comment was plainly referencing the success of the Clinton era policies as opposed to the failure of the GOP’s years under Bush’s policies.

“[Obama] removed the requirement of work from welfare.” Romney made this accusation that is directly refuted by the facts. What Obama did was to permit waivers for states that could affirm their progress in moving people from welfare to work, and allowing them flexibility to enhance their programs. It’s a modification that Romney himself had requested when he was governor of Massachusetts.

“I actually believe in redistribution.”This was purposefully clipped from a much longer statement wherein Obama was praising entrepreneurs and the free market, while also seeking to improve the parts of government that provide services like schools, roads, etc.

Those examples illustrate the only consistent component of Romney’s campaign strategy: Rip soundbites from Obama’s speeches and build dishonest explanations around them. He uses this tactic because he has concluded that it is better than trying to explain his unpopular and/or unworkable positions on the economy, jobs, Social Security, foreign affairs, etc. And he still refuses to release more than two years of his tax returns.

Look for more of the same in the next few weeks as Romney gets even more desperate for something to talk about that doesn’t result in his foot winding up in his mouth – again.

3 thoughts on “Mitt Romney: The Master Of Mangling Context”