Somebody tell me why Tucker Carlson still has a television show. Seriously! Is there anyone at MSNBC who reads News Corpse? I want an answer. I just can’t figure out what’s going through their heads.

Tucker has been the worst performing program on the MSNBC primetime lineup for as long as he’s been on. And he rarely notches anything above last place versus his competition. That record of defeat has predictably repeated itself for February 2008. 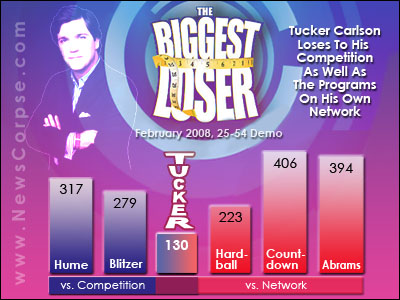 What does it take to get canceled by this network. Does Tucker have to insult a women’s basketball team to get the ax? There are many examples of him insulting women, like when he said about Hillary Clinton that, “there’s just something about her that feels castrating, overbearing, and scary.” Then there is the time he said Obama “seems like kind of a wuss,” and “sounds like a pothead.” Now he has taken to inviting the most repugnant guests he can dig up. Last month he hosted Jonah “Liberal Fascism” Goldberg and Roger “C.U.N.T.” Stone.

But the network doesn’t need a scandal to ditch Tucker. They just need a desire to get better ratings and make more money. Isn’t that what they’re in business for? Tucker’s show is an expensive flop and it is bringing down the shows adjacent to it. As I’ve said on many previous occasions, there is simply no business case for keeping this show on the air. And yet it’s still there.

It’s not like MSNBC doesn’t have some recent experience with success on which to draw. Keith Olbermann’s Countdown continues to surge and is the fastest growing program on cable news. Last Thursday it even scored a #1 ranking, beating its nemesis, Bill O’Reilly. But even when it doesn’t come out on top, it’s a more valuable asset. O’Reilly’s audience is not particularly appealing to advertisers. Only 17% of its total viewers are in the coveted 25-54 demographic. Countdown’s audience in the demo is 40%.

So what’s wrong with MSNBC? Why don’t they want to emulate their successes and eject their failures? Since there are no arguments from a business perspective for keeping him, then what are their arguments? There is good cause to suspect that their motivations are not wholly reputable. Either someone is doing someone else a favor, or some political bias is being exerted, or Tucker has photographs of an executive in a compromising situation. It’s worth remembering also, that Tucker is the son of Richard Warner Carlson, a former U.S. ambassador, director of the U.S. Information Agency, and president of the Corporation for Public Broadcasting. There is plenty of room for salacious speculation, but what there is little supply of is reason.

Any half-way sane television professional would have canceled this loser long ago. I think it’s time the viewers get involved and demand that MSNBC account for themselves. If, as I suspect, they are protecting Tucker due to some unsavory and secret compact, then they are violating a public trust and they need to come clean. Write to MSNBC and ask them to explain why Tucker is still on the air despite his dismal performance. Ask them why they are protecting a program that has never delivered for them. Feel free to cite the data in this article and ask for specific answers. In the pursuit of journalistic ethics and transparency, we have a right to know.

One thought on “Tucker Carlson: The Biggest Loser”