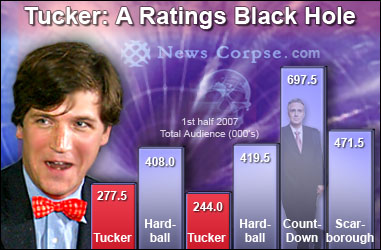 It is well known that Tucker Carlson’s program resides in the lowest lying, scum-ridden depths of TV punditry. He consistently loses to his competition and he is the lowest rated program on his own network (see Tucker Carlson: A Ratings Black Hole).

That may explain the trouble he is having booking guests who are not idiots or purveyors of profane filth, lies, and slander. Yesterday Tucker may have outdone himself by interviewing “Republican Strategist” Roger Stone.

Stone is the founder of Citizens United Not Timid, or C.U.N.T. Their stated mission is to “Educate the American public about what Hillary Clinton really is.” Tucker didn’t bother to disclose this affiliation. Apparently he doesn’t think it’s relevant to his viewers that the guests he presents as experts are actually political pornographers.

What’s more, Tucker is providing more evidence for those who already believe that MSNBC is brazenly anti-Clinton. It is mind-boggling that after both Chris Matthews and David Shuster have had to issue public apologies for derogatory remarks directed at Clinton, Tucker would invite this smear-meister to discuss election issues as if he weren’t a repulsive sack of vomit. Ironically, it was Shuster who, alone amongst the punditry, called out Stone for not revealing his part in C.U.N.T. Shuster, who fills in for Tucker on occasion, was unavailable to question Stone because he’s still on suspension for his “pimped-out” gaffe.

I thought Clinton’s reaction to the Shuster affair was overblown and calculated for political effect. But I wouldn’t fault her, or her campaign, for blasting Tucker for granting air time to Stone and the slime and maggots that come out when you turn him over.