With the multitude of disreputable sources that Fox News has to chose from, it is still somewhat surprising that they frequently chose to embrace the utterly demented WorldNetDaily as a source for news stories that they republish on Fox Nation.

WorldNetDaily is run by the notorious conspiracy monger Joseph Farah. It is the base for Obama Derangement Syndrome sufferer, Ed Klein. It is where former Swiftboat liar, and current King of the Birthers, Jerome Corsi, hangs his hat. And it is now being featured on a Fox News web site for this screwy bit of nonsense: 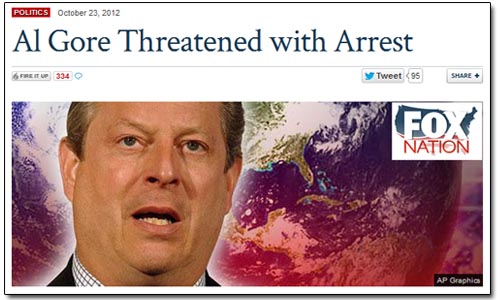 The assertion that Al Gore has been threatened with arrest is not one that should worry the Vice-President. That’s because the threat did not emanate from any one connected to any law enforcement agency that might be able to carry out the threat.

As it turns out, a well known conservative nut case who goes around calling himself Lord Monckton is the person who made the threat. It holds no more risk than if I were to threaten to have Monckton apprehended by Druids and cast into a medieval dungeon.

The affair sprang from Lord Monckton’s outrage that Gore is parading around the British countryside complaining about global warming. Monckton, who also anointed himself the “high priest of climate skepticism,” was not going to sit still for that. So he issued this missive to Gore:

“If you say anything in Gibraltar which has any bearing on the fortunes of Generations Investment Management, if you say anything that is incorrect about global warming, and that’s how Generations Investment Management is making a lot of its money, then you are guilty of an offense under the Financial Services Act of 1988, and you will be arrested, prosecuted and convicted.”

Monckton doesn’t explain precisely what provision of the Act Gore might be in violation of, but the likelihood that he is in any legal jeopardy for saying the same things he has been saying about the environment for years is pretty low. Gore has not been saying anything different than any other climate change activist in the U.K., and none of them are in jail. Monckton is simply a babbling fool who manages to get his ravings published on a web site that is ignored by people with functioning cerebellums.

The shame in this has nothing to with Monckton himself. There are lots of dolts spewing insane garbage and talking to themselves in bus station restrooms. And many of them get their work published in WorldNetDaily as well. But for Fox News to feature it as if it were a newsworthy story that contained some measure of truth is just another example of how much they have in common with the tabloid trash that generates this crap.

4 thoughts on “Fox Nation vs. Reality: Al Gore Going Up The River?”