There may be just one day to go, but that is no reason for the right-wing media to relax their incessant campaign of unhinged babbling and racial insults.

No one should be surprised by Fox News hammering away at their fervent anti-Obama diatribes. This morning they have ramped up their attacks on Obama for everything from Benghazi (which they compare to Watergate) to Hurricane Sandy (which they compare to Katrina). Needless to say, their comparisons only make sense to people who have had their frontal lobes removed.

In addition to this fictionalization of the news, much of the conservative press is rushing to publish their predictions of tomorrow’s election results. In this area they are just as delusional as they are in their so-called “journalism.” The big, all-cap headline at Fox News is that “ROMNEY WILL WIN.” 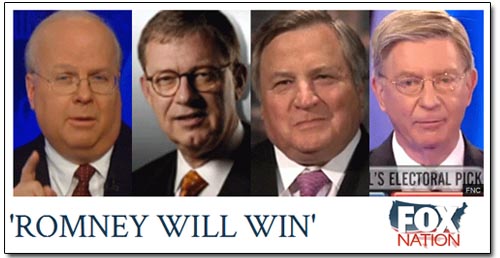 These prognostications emanate from a group of pundits who hold the Olympic record for being wrong. Karl Rove, Michael Barone, Dick Morris, and George Will, all claim that, not only will Romney prevail, but he will win by a landslide. If I were Rove, Barone, or Will, I would change my prediction just because prostitute toe-sucker, Dick Morris, agreed with me. But the general sense of over-confidence on the part of these pundits proves that they are more interested in trying to produce a result than in honestly forecasting one.

On the other side, the conservative U.S. News and World Report consulted their own pundit for a considered analysis and prediction for this historically significant election: 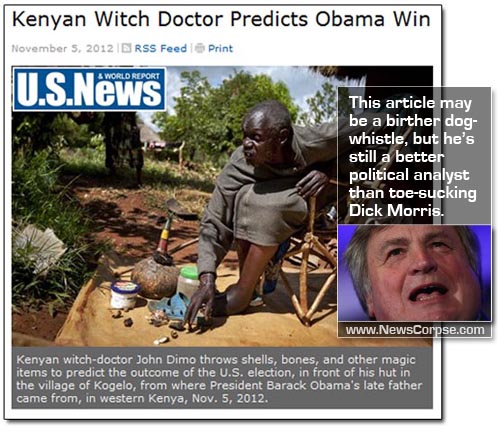 So there you have it. USNews went all the way to Kenya to find someone they could quote with a prediction calling for Obama to win. Of course, there are hundreds of domestic political analysts they could have consulted for the same response, but apparently it was more important to blow that birther dog whistle and associate Obama with a foreign and pagan philosophy.

By the way, that’s also what Romney’s running mate, Paul Ryan is doing in his recent statement about the path Obama is leading America down:

“It’s a dangerous path. It’s a path that grows government, restricts freedom and liberty, and compromises those values, those Judeo-Christian, western civilization values that made us such a great and exceptional nation in the first place.”

This sounds exactly like the late campaign desperation rhetoric of Sarah Palin when she started yammering about Obama “palling around with terrorists.” It’s the rhetoric of a campaign that knows it is going to lose.