This has been an interminably long, divisive, and vitriolic campaign. Romney’s camp complains that he was accused of murdering the wife of a former employee of a company that Bain Capital drove into bankruptcy. President Obama has been charged with intentionally allowing an ambassador to be murdered as he watched. Romney’s campaign co-chair, John Sununu, declared that “This country can’t be saved unless we get rid of this president.” Ted Nugent came just shy of threatening to assassinate Obama, earning a visit from the Secret Service. And Americans across the country had to suffer through Meat Loaf butchering the national anthem.

Yes, it’s been a brutally difficult time for the country, but leave it to Glenn Beck to put the poisoned cherry on top of a stomach-churning sundae:

They are nasty, divisive and, I’m sorry, but there is no way to describe that quote from Valerie Jarrett other than evil. Warning: Saul Alinsky is just the beginning of these people.

But I believe in the American people. I believe that we are not too far gone. I believe that people can watch and see the difference. They can feel the difference. When you watch Barack Obama, you can just see he is angry. When you watch Mitt Romney, you can see he is not. We are not an angry nation. We don’t listen to demagogues like that. It doesn’t work. No matter how much power he has amassed, no matter how many friends in the media he has, Americans know. And if they reject it this time, if they’re so dead inside – that’s a possibility – if they’re so dead inside that they can no longer see the difference between good and evil, we have to be destroyed because we will be a remarkable evil on this planet.

Beck’s trademarked dementia has once again proven to be a show-stopper. His assertion that an Obama victory somehow translates into “drive[ing] the righteous from among” us, makes no sense whatsoever. Why wouldn’t the “righteous” stick around and continue to advocate for their agenda? Where does Beck think they are being driven to? Canada? Israel?

If God’s wrath is coming, what form will it take? Perhaps a hurricane in our most populous region? Oh wait, that already happened even before the election and many right-wingers claim that it helped Obama. Was that God’s intention? Could Beck’s God have deliberately assisted Obama? Remember, Beck’s God is also Romney’s god – Mormon. Does Romney share this Apocalyptic view?

Beck insists that he cannot be called paranoid, even as he sounds the alarm that it is “last call” for America. No, that’s not paranoid. And it isn’t as if he has signaled the end times before. Oh yeah, he has done that – repeatedly heralding the arrival of the “Perfect Storm.” 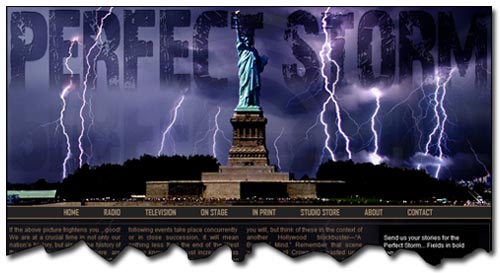 Beck disingenuously says that he “believes in the American people,” while leaving open the possibility that we are “dead inside” and “can no longer see the difference between good and evil.” It is that inner death that would define us as “a remarkable evil on this planet,” and condemn us to destruction.

There is one thing for which we can all be grateful on this election day: Glenn Beck cannot be elected to any divine post from which he could carry out his dementia.

UPDATE: Obama Wins! So it’s official. We are dead inside and have to be destroyed. Can it wait until after breakfast? And perhaps we should start with Beck and his followers. They are probably in more of a hurry to get to Heaven anyway (although they may be woefully disappointed when they reach their destination).

UPDATE II: Beck is now advising his disciples to buy farmland and guns. Next he’ll be leading them to a commune in Guyana (Becktown?) and making them Kool-Aid.

11 thoughts on “Glenn Beck: If America Votes To Reelect Obama Then “We Have To Be Destroyed””